I liked Fontana Dam best because of its visitor centre with free toilet and shower facilities - including hot water! The shelter nearby is so nice that it is called Fontana Dam Hilton, but as usually I did not stay in the shelter but hiked on. Election day was coming up and I really wanted to watch the whole event on TV. I had seen all the previous election debates and even the vice-presidential ones either on TV or had listened to them on my cell phone radio and now of course I wanted to see the real thing. I opted to stay in a hostel together with fellow hikers Silver Potato, Cracker and others which would prove to be an interesting combination as one was a hard core Republican whereas the rest of the hikers were for the Democrats. And I truly spent an exciting evening in front of the TV - and I guess you all know who won those elections.

I continued hiking around Silver Potato and Cracker who are avid mountain bikers and we found an interesting topic: The seven deadly sins. A fellow hiker had called me a "glutton for punishment" when I told him about my next hiking plans and I learnt what gluttony is - and that brought me to the question of what the other 6 deadly sins were. Surely in such a Christian country as the US we would be able to name them all? But even with combined hiker effort we could not come up with the solution and I had to promise Silver Potato and Cracker not to attack passing hikers with weird questions about deadly sins - it might cast a bad light on us. For all of you who don't know the answer either but care to know you will find the solution here. 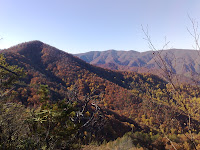 Around the same time I had had a pretty bizarre "Christian" experience myself: I was happily hiking along the trail when I saw a sign saying "Trail magic 500 yards" and of course no hungry hiker can pass up such an opportunity. I ended up in front of a rather posh house which was quickly opened and I was invited to an opulent pancake breakfast. The trail angels, a retired couple seemed very nice and friendly. But all of a sudden and completely out of context the husband asked me: "What do you think will happen when you die?" I nearly dropped my fork and all my alarm bells started ringing. Had I fallen into the hands of serial killers? It turned out not to be quite that bad - I was only dealing with some over-zealous Christian missionaries who tried to proselytize hikers. Discussion was not possible and ended up getting a very long sermon which I had to endure defenseless as I was still eating breakfast. And in the end I was more or less forced to take a Christian book with me. I was very glad to get of there and not surprised at all to find loads of similar books in the next shelters....Apparently other hikers had had to endure similar experiences.
Eingestellt von German Tourist um 14:14