AT: Tennessee or Wildcat, Halloween and Hot Springs

As it was finally getting colder and colder every day I was looking forward to the town of Hot Springs – which really boasts some hot springs for soaking. But there was another attraction, too: Elmer's, a sort of buddhist retreat and hiker hostel. Elmer is an American offers very cheap accommodation in his huge, but a bit decrepit house. The rooms are big, but the sanitary facilities a bit out dated and each shared toilet had its own quirk. But all this was more than compensated by an extensive library and the fantastic vegetarian food served for dinner. As each night there are different guests Elmer starts the dinner conversation by a question everyone has to answer in order to introduce himself – in my case “If you were to die in a natural disaster which one would you choose?” I guess in reality you do not have much choice if your number is up, but the various answers were quite interesting. The hot springs on the other hand were a bit disappointing in comparison: This being puritan America you could only soak in separate pools – and it was not very sociable to sit all on my own in an outdoor tub in water that got colder by the minute. 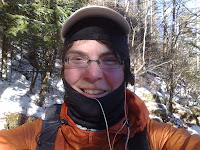 In the Smokies I finally received the first snow of the year - and it hit me hard and very cold. In the morning not only my shoes and socks were frozen, but my complete water bottle. Even on the CDT I hardly ever had so much frost. So I was trudging through ankle deep snow on my way to Newfound Gap - but I was in very good mood because I knew that some trail magic is waiting for me there: Wildcat! And of course Wildcat was already waiting for me when I got to there – with tons of food like sandwiches, fruit and sweets to feed a hungry hiker. His wife Becky even cooked Sauerkraut for me as a special treat for German hikers.


Wildcat had hiked the CDT the same year I did and although we just had met for one evening he invited me to his house and a zero day in Maryville, TN. And what a great zero day I had: Halloween. We do not have Halloween in Germany so I was invited to do the Trick or Treat stuff with the kids (probably eating most of the candy I was supposed to give to the kids myself....) I was very well fed, laundered and showered when Wildcat and his wife Becky brought me back to the trail. And even the snow had melted by then which was just in time because I had to climb to the highest point on the AT this day: Clingman's Dome at an elavation of 2.025 meter. After all that snow I enjoyed a beautiful Indian Summer day.
Eingestellt von German Tourist um 06:01