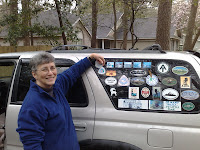 My boat shuttle never showed up, but trail angel Linda was punctual on the minute to pick me up! (It later turned out that the camp ground people who offer the boat shuttle had received my boat order, but before they had taken it down a family emergency came up and my little boat ride got forgotten...)
After my very limited diet for the last week and having saved 10$ on the boat ride I decided to splurge and buy only the very best food for the next stretch. We went to a Publix where I not only indulged in expensive Kashi muesli and Alessi soups, but also got 8 muffins that disappeared too quickly. Linda also took me to an outfitter who repaired my stove and exchanged a broken Platypus bottle - this has been about the 12th broken Platypus in my long hiking career...
I was also very culturally deprived after hiking for almost 2 months - I had already been fishing old newspapers out of the trash can of St. Marks visitor center to have some reading material. Tallahassee was great for stocking up on culture: The next day I visited the Florida History Museum and an Art Gallery plus I bought 2 paper backs for 35 cents each at the local library. 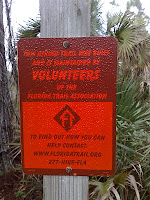 But the highlight of my stay in Tallahassee was another talk at the local chapter meeting: I had coincided again with their monthly meeting date and was honoured to talk about my thruhike as I had done in Orlando. In Orlando I had met Peter Dursnell, the FTA president, and in Tallahassee I met Deborah Stewart-Kent, the FTA executive director. I have never hiked a trail where I had met with so much "brass"! It was incredibly interesting to hear Deborah talk about their ideas for the Florida Trail and even be able to give her some input from the thruhiker perspective.
Eingestellt von German Tourist um 17:14