This trip had had a rather stressful start due to my very tight planning. Between flying in from Santiago and leaving for Minneapolis I had had just 3 1/2 days in which I had to change gear, go through half a year's mail, try to assemble the kayak again and do about 500 other little things. The time was too short and although I managed to get all the important things done I felt rather stressed out in the end. Luckily I had stayed those days with my friend Wulf who provided the perfect logistics from fast internet access, printer and copy machine to a last minute repair of a broken kayak brace. Without his help I would probably have died of a stress attack.

But finally on Tuesday morning I was sitting in a taxi to Berlin airport with two huge bags containing a foldable kayak and a shitload of gear. Luckily I had a baggage allowance of 2x23 kg but the kayak is very bulky and luggage dimensions were the biggest problem. But to my big surprise check in at the airport went smoothly and my huge bags were accepted without checking their size. And so I started a 18 hour trip from Berlin via Copenhagen and Reykjavik to Minneapolis. At the end I felt like a Zombie. But the worst was still to come: US immigration! I was thoroughly quizzed about my past and future travels, my financial situation and marriage plans. Unfortunately I did not have a return flight and when asked when I wanted to fly back I could only say that it would be within the next 6 months. Wrong answer! "So what are you going to do if I only give you 2 months?", asked the immigration officer. My heart sank. Admitting that I had a paddling partner was another mistake. "Why is your travel partner not your boyfriend?" was the next question. It went on and on and when I was about to wonder whether I would be sent back to Germany I was eventually given the usual 6 months stay. And when I stumbled out at least all my luggage was there and intact. 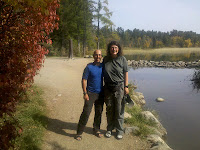 Things improved rapidly now. My paddling partner Brian was already waiting for me and our CS had already come to pick us up. We were given a whole basement to spread out our combined 100 kg of gear and I could sleep in a nice bed. I definitely had to catch up on sleep! Next day we spent busy shopping and buying paddling gear, food and a phone card for me. The SIM card for me turned out to be the biggest problem because surprisingly smartphone data is very expensive in the US. All over Europe I had been able to get unlimited data for my smartphone for less than 15 EUR per month, but here I have to pay 50 USD for the slowest speed and worst coverage. The main problem is that in Europe you can choose from a modular system whereas in the US you can only buy packages of voice, text and data. We went from T-Mobile to AT&T and back until I finally bought a plan. Luckily our CS hosts had let us borrow their car. Without our own wheels we would never have been
able to accomplish all that.

Next day was a big challenge for me. We had a rental car for two days. When I had booked it Brian and I had agreed that he would be driving but unfortunately he had let his driver's licence expire. That meant I would have to drive - but I had not been behind a steering wheel for three years! I was extremely nervous although everyone assured me that driving is like cycling. Once you have learnt it you never forget. And it turned out to be exactly like that. Once behind the steering wheel my last driving felt like yesterday and to my big surprise I actually enjoyed it. Of course it helped a lot that Brian was doing all the navigation. Also driving is so much easier in the US with wide roads and a speed limit.

Next highlight was a visit to Aldi. Yes, there is Aldi in the US and they sell German chocolate. We could do almost all our resupply at Aldi which was very cheap and made me happy. We also went to Chipotle twice, my favourite Mexican fast food place where you can get huge delicious burritos. Time passed very quickly in Minneapolis but we got everything done and set off for Lake Itasca early next morning. 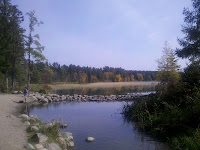 Lake Itasca is the official source of the Mississippi River but we were not able to start there. This summer had brought an unusual drought and extremely low water levels. Plus a storm had passed through in July downing hundreds of trees that the Forest Service had not been able to clear out yet. We still drove to Lake Itasca to take the usual photos of the Mississippi source but what we saw confirmed the rangers' warnings. The Mississippi was almost a trickle there and no way we would get through there in a boat. But not everyone came as prepared as we were. We saw a young Canadian couple with their canoe who were to embark on a Mississippi thru paddle as well. Apparently they did not have a clue of the low water levels. We are now curious to see how they fared. We continued on to Lake Bemidji where we stayed at the Park camp ground. I took the car back to the rental drop of all own my own without getting lost or wrecking the car and was subsequently awarded the American driving certificate by Brian. Now we are at Lake Bemidji with 150 kg of gear and food and wonder how all this will fit into our kayaks.
Eingestellt von German Tourist um 14:41