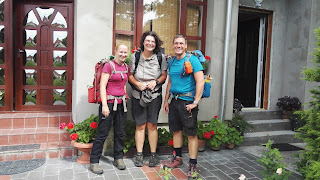 My hike through Hungary started with a fabulous meeting: Anne and Ulli, two German EB-hikers had heard of my trip through FB. Although they were already far ahead of me in Hungary, they took a train back to Sarospatak to meet me. We booked ourselves in a nice holiday apartment and spent the afternoon in the open air thermal baths - a wonderful relaxing experience and one of the reasons why I like hiking in Hungary so much! We basically talked non-stop and exchanged ideas and plans. One plan has already become reality: We have already had our post-trip meeting in Erfurt together with Jana. 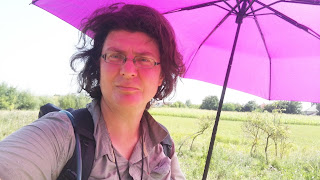 My entire time in Hungary it was hot - and I mean really freaking hot! Every day was above 30 Celsius and I was hiking with my umbrella for sun protection. I was following irrigation canals many times which resulted in humidity and even more sweating - plus horseflies ... One time I had to walk several kilometres along a canal and then the same distance back again on the other side just because there was no other bridge ... I was not too happy! 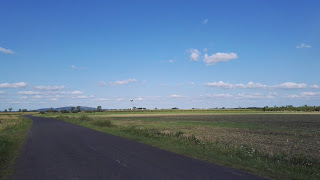 This time in Hungary I was walking on the Aföldi Kektura through the Pannonian Lowlands. I had already known in the planning stage that it is not a good idea to hike here in the middle of the summer. And all my expectations came true: It was flat - I mean really flat. In the beginning there was a lot of road walking and no shade. And it was hot. There were no lakes to swim in and the water in the irrigation canals was so disgusting that I could not even use it for washing up. But I went into every public swimming pool along the way! 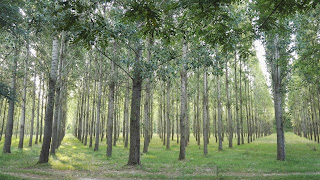 But not all was bad: Water was no problem because in almost every Hungarian village there is a public water fountain. And wild camping was great because it is legal in Hungary! Plus I walked through these endless tree plantations that were ideal for setting up camp. Flat ground, and lots of shade in the morning! Some people would say these straight-line plantations are boring but I found them very pretty and felt like walking through one big park! 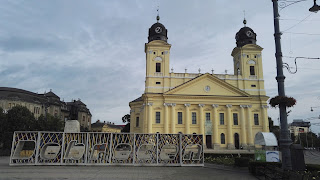 My only big town stop in Hungary was Debrecen where I stayed in a brand new air conditioned pension. I could even wash all my clothes there. Timing was perfect: I was in town when a big storm dropped rain in buckets and the temperatures! I made one last big shopping trip to Aldi. It made smile that in Debrecen Aldi is located right next to the Grand Casino! Aldi attracted by far more visitors - at least during the day ... 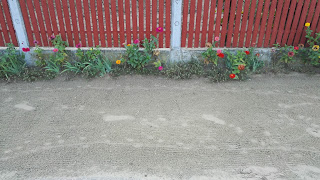 Hungarian villages are impeccably clean. Usually there is no paved sidewalk but local residents are raking the dirt! I almost felt bad walking there because I left foot prints! Most popular tree lining the village roads is the plum tree and as the plums where just getting ripe I was gorging on fruit. I was now getting closer to the Hungarian-Romanian border which is also the Schengen border. In a Hungarian village a hiker with a backpack sticks out like a sore thumb and therefore I was twice stopped by the police. They were very professional but checked my passport thoroughly. One policeman spoke excellent English and told me he had just recently hiked the Camino in Spain! 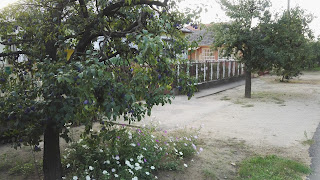 Another encounter was not that friendly ... Shortly before the border I was stopped by an old guy on an even older motorbike. I took him for a homeless person asking for a cigarette or money and briskly walked on. But he kept yelling at me in Hungarian and follow me along an irrigation canal. I was already considering to defend myself physically when he finally left. But ten minutes later a different but equally unkempt guy showed up on a mountain bike. At least now I understood one word: Kektura - which is the name of the trail I was hiking on. When I signalled that I was just a hiker the guy relaxed and disappeared. 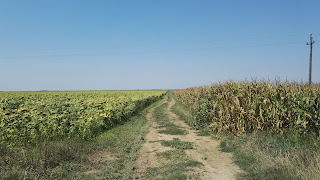 Both men had worn high-visibility jackets with the inscription "Polgarörsek". When I googled that word I got scared: it meant "militia"! First I thought I had met some self-proclaimed sherriffs but later Hungarians told me that these "second-class policemen" are actually appointed by local counties. Their goal is to deter from petty crime and protect nature reserves. Apparantly they had taken me for an illegal immigrant ...The offical E3 trail crosses the border at Letavertes but that would have involved 60 km of roadwalking in Romania. Instead I continued on the Kektura and crossed at Artand - after walking through endless fields in the summer heat.
Eingestellt von German Tourist um 13:59