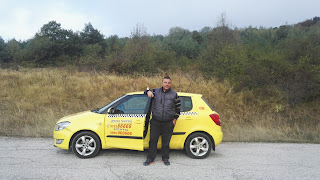 From Botevgrad I took a taxi back to the trail - no problem because fares are cheap. I felt sorry for the driver because the road up to the pass was full of potholes ... I was now going to traverse the Central Balkan Mountains, the most breathtaking part of the entire Kom-Emine-Trail which would bring me up 2400 metres. But there was one big problem: My time window for that traverse was very narrow: I just had 4,5 days to do the entire traverse because then the weather was closing in. The forecast was for freezing temperatures and snow at high altitude. 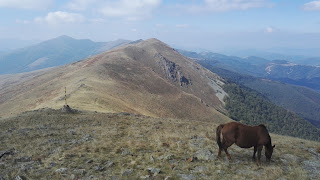 That meant I had to do 30+ kilometres per day with only 10 hours of daylight in alpine terrain. And to make things worse I wanted to get off the trail into lower elavation for camping because it was already freezing cold at night and I did not have winter gear ... It was a pity to rush through this wonderful landscape but because of the weather I had no choice! The trail runs along the crest all the time with every view more impressive than the last one! I did not meet any other hiker but there were dozens of wild horses roaming free. No more cows - I guess it was already too cold for them.

The only other people up in the mountains were farmers herding up their animals. One particular "cowboy" on a horseback started talking to me aggressively. I did not understand a word and just walked on - and was frightened when I realised that he was following me! No other soul was in sight and I did not like his look at all - but eventually he turned back and left me alone.

I barely made my daily mileage of 30 kilometres despite walking from before sunrise into the night! 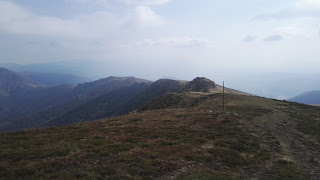 On day three I had booked myself into accommodation off trail. It was already getting dark when I eventually approached Beklemento Pass from where I wanted to hitchhike down when suddenly fog closed in. Within minutes sight was reduced down to 10 metres and I was wondering if I could even make it to the pass! Luckily I could but in the fading daylight no one would stop - and it was mostly trucks anyways. I ended up walking another 4 kilometres before I arrived at the hotel - and nobody was there. But from other places I knew what to do: You have to call the owner on your cell phone - and he promptly arrived and even fired up central heating! 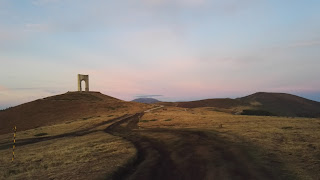 Next morning he rather unexpectedly served me breakfast and drove me up to the pass in his car where I was rewarded with a glorious sunrise at the Socialist monument "Arches of freedom". Weather was perfect that day but the forecast deteriorated steadily. I finally made the decision to get off the crest and detour around the highest mountain Botev. Even if I made it over Botev in time I would afterwards be snowed in in some mountain hut for an unknown time ... 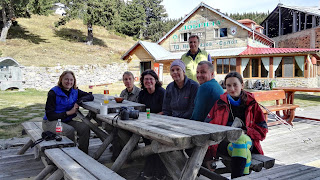 When I arrived at Dobrila hut a big hiker group was waiting for lunch - and they were Germans! Of course we immediately started chatting and one lady even knew my book! After lunch I left and started my descent into the valley. What was only a detour for me turned out to be a really scenic route! I slept again in my tent in the mountains before I hit the road again on my way to a hotel in Apriltsi. Along the way I encountered a nice surprise: Troyan Monastery! 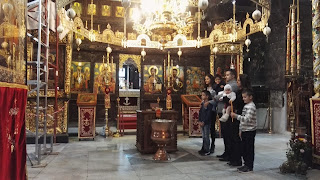 This is Bulgaria's third biggest orthodox monastery and it was swarming with tourist! After a wonderful rest stop there I eventually followed my GPS across some hills where probably no other tourist before me has ever been ....Then a long last road walk with an ever darkening sky before I arrived at my hotel in Apriltsi where I was to stay for two nights. As soon as I had arrived there the weather turned really bad. It more or less bucketed down for  24 hours straight. I only moved out of my hotel bed in order to eat in the hotel restaurant ....
Eingestellt von German Tourist um 00:37