After two nights in Apriltsi I was itching to start moving again. The rain had stopped and I hoped that the snow would have melted by the time I reached the crest. I left my hotel at the latest check-out time and did a half-day roadwalk to Ostrets where I stayed in a "wellness" hotel. I have to admit that this was pure luxury - at this low altitude I could have easily camped ... But the hotel price was only 30 EUR and included a sauna that was especially fired up for me! I loved the posh hotel with its nice restaurant and its very friendly owner! 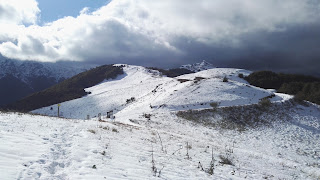 Next morning - after an incredibly good breakfast consisting of raised pastries - I started my ascent up to the crest. And my worst expectations came true: Snow had not melted yet and I encountered a straight blanket of wet snow on the crest ... The ascent back to Kom-Emine had been very easy on a forest road but the path on the crest turned into a nightmare. Snow was knee-deep and no one had been up there before me so I had to "wade" through it. Of course I was so much slower than expected - and rather frustrated. 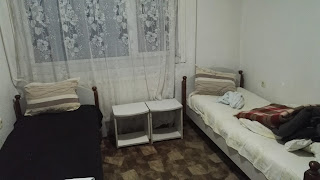 I decided this was the right moment to sleep in one of the many mountain huts along the Kom-Emine-Trail. When I reached Partisanska Hut it was already getting dark - and inside was a fire going! An older couple were the hut keepers. They did not speak English at all but we could still communicate somehow. I was given a single room although no one else was there. There even was a hot shower! Although the room was old and worn it was clean but I have heard very different stories about other huts! 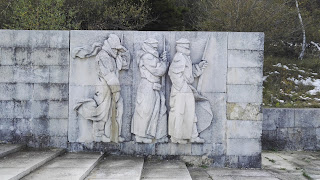 Next day was sightseeing day! And luckily at lower altitudes the snow had by now completely melted in the sun. First I came across the geographic centre of Bulgaria which is marked by simple metal arch. Next was the impressive "Monument of Freedom" at Shipka pass where I had to do a full resupply at the souvenir stalls ... Then I climbed up the hundreds of the stairs to Shipka mountain passing Socialist heroic sculptures and reached the look-out tower on top. The view was breathtaking! 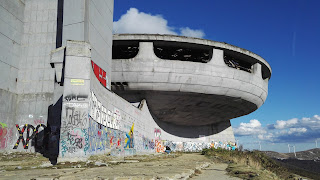 But that was not enough of sighseeing that day: Next was the Assembly Hall of the Bulgarian Communist party - a futuristic concrete building that looked like an UFO. At least one dozen tourists was visiting with me despite the fact the the place was closed and crumbling. It is a shame that the Bulgarian government is not renovating this building which already now is a tourist magnet! I had "lost" a lot of time sightseeing which meant that I now had to race through an extensive wind farm before I could set up camp in the forest. 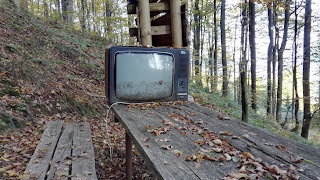 Next day I passed the most photographed sight  on the entire Kom-Emine-Trail: an old TV that someone has placed on a picnic bench in the middle of the forest! I have seen pictures of this TV in every blog about Kom-Emine and even in its guidebook. There is a nice spring nearby and even I had a short break here. In the nearby national park I could see my EU tax money go to waste: There were several huge information boards along the trail - and each showed the same map ... 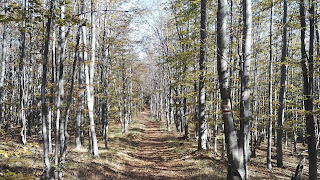 By now I was in hiker heaven: Sunshine every day and due to the lower altitude temperatures were nice and no problem even at night times. I was following the crest with lots of ups and downs but now under tree cover all the time. Camping was dead easy and no other hikers around. I was approaching my last town stop and resupply on trail in the town of Kotel. As usual I had booked myself into a hotel on my smartphone. Kotel is a tourist town and I expected a supermarket and several restaurants. 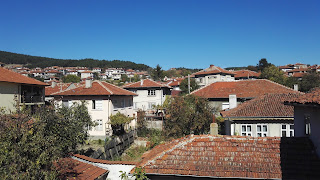 But no such luck. There was no real supermarket and I had to do another limited resupply in a small mom-and-pop store. Most restaurants were closed but I found a great pizza place. My hotel was nice but the landlady spoke no word of English and could on not handle google translate on her smartphone. She also thought that speaking as loud as possible would make me understand her better .... To make things worse one of her friends turned out to be a former German guestworker. Despite his German language skill being less than basic he wanted to meet me later in Berlin. 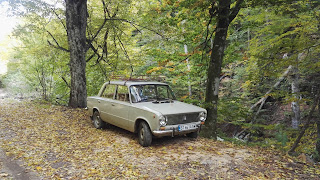 When I left next day my land lady came running after me: I thought I had forgotten something but she just wanted to tell me to give her an excellent review on booking.com ... And her friend scared the shit out of me when he followed me in his car and insisted that I should give him my German phone number ...