This week on the Kungsleden turned out to be my most social time of the entire hike! First I met Jonas from Sweden who was hiking with an American girl. When the three of us arrived at this lake, a couple just rowed in, too - but considering how grumpy they were we concluded that it rowing was not such a good idea. We took the boat despite the fact that Jonas admitted that he had rowed before. Because they wanted to do a side trip I continued on my own but only for about two hours because I then met a young Swedish couple who wanted all sorts of advice on hiking in Europe.

We ended up together in Saltoloukta mountain station where I was camping outside to save at least some money - that I then splurged on a fantastic AYCE dinner with reindeer roast as the main course! Food here was absolutely fabulous and I started to understand why many Swedish people come to these mountain stations! The Swedish couple ended their tour here and asked me whether I wanted their left over hiker food supply. Of course I agreed - and was given 13 (!) packages of dehydrated trekking meals! (They did not have any left over chocolate though...) This was worth a fortune and I could not believe my luck. I could also find more left overs at the "free food" shelf in the camper kitchen. Well, I was not very hungry on the Kungsleden ....

Although my books have not been translated into Swedish this young Swedish woman recognized me the next day on the trail. She really impressed me because she was five month pregnant and hiking the entire Kungsleden on her own! "This is probably my last long hike for a long time", she told me. "And therefore I wanted to do it alone!" I wish her all the best!
Next was a German teacher who camped next to me one night - and asked me for an introduction to ultralight hiking! Although I had plenty of personal communication - internet was not available here. During all my hike I have had cell phone reception almost every day - but here on this busy trail I was cut off for almost four days! The closer I got to Abisko the more hiker I met - more than 100 on my last day. So much for solitude in the wilderness. 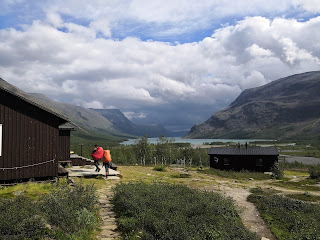 Most of the hikers stay in the mountain stations and huts along the trail. Whereas the mountain stations are run by paid professional staff the huts are staffed with volonteers who even have to buy their own food and are only given a nominal compensation for their work. I talked to several of these volunteers who work here during their holidays and love it - no wonder! All these huts are located in spectacular settings!
As much as I enjoyed the company and the fantastic scenery - I was glad when I reached Abisko and the end of the Kungsleden because the crowds had started to get onto my nerves! 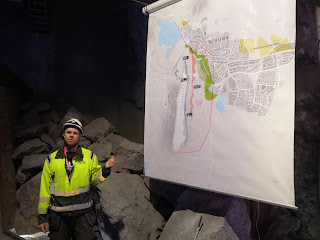 From Abisko I took the train to Kiruna for a rest day and a little sightseeing. The train was late which seems to be normal here because this line is busy with eight daily freight trains transporting ore from Kiruna to Narvik. The mine is also Kiruna's biggest tourist attraction and of course I took a tour! There are more than 400 kilometres of road leading down to more than 1000 metres below sea level. Because of the mine parts of the town including the wooden church will be moved - a tremendous project. I enjoyed my stay in the youth hostel and was by now looking forward to the rest of this hike. My mood had improved tremendously since Norway!
Eingestellt von German Tourist um 23:06