Hiking through this state was quite a cultural experience. On the one hand hiking was surprisingly remote and the scenery very nice, but on the other hand every weekend half of New York including their mother and kitchen sink was out there, too. I hit Bear Mountain on a Sunday and almost got a claustrophic attack. There is small zoo there where the AT goes through and I could not decide what was more interesting: The animals or the other visitors! I saw my first and only bears so far in this zoo - behind cage bars of course. But the most amazing thing for me was the variety of visitors. There is a picnic area nearby that was bursting with people. I saw orthodox Jewish families in their old fashioned black suits picnicking next to Arab families with headscarves next to Indian women in Saris. The most amazing thing for me were the Jewish families who still spoke Jiddish, which consists of many German elements. I ended up in a long discussion with one Jewish family (in English). 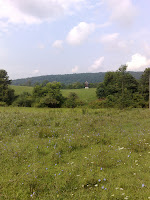 There was also one very outstanding trailmagic in Unionville, NY. The mayor of Unionville is hosting hikers after his wife died a couple of years ago. In order to show his love for the hikers he calls them "stupid assholes" all the time which took me quite a while to get used to. The mayor himself is about 70 years old. He has some friends that help him with the hikers and are about the same age so the whole set-up reminded me a lot of a male version of "Golden Girls". There are several rules in this house:
The only drawback of the Mayor's house was that all of the male "Golden Girls" where chain smoking - I decided to camp outside instead of staying in the basement where the mayor had put 10 bunk beds. 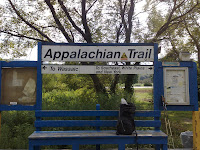 Another place that I had looked forward to a lot turned out to be a big disappointment: Graymoor Monastery. I had visions of a peaceful and scenic little monastery where I could get a bit of a spiritual rest. Instead Graymoor monastery turned out to be huge - and I could not even find a church. The hikers are not allowed inside the monastery buildings any more but have to camp on the ball field - and that field today was occupied by hundreds of Latinos celebrating mass and having a huge barbecue afterwards. Although the rather expensive food was nice I was very disappointed by the lack of spirituality of the whole place - and just hiked on after an extended lunch break.


By the way: In New York there even is an active train station called "Appalachian Trail". And at some point on the trail you have to cross a busy highway - hitching on it would get you into New York City that is only 40 miles away! Although a lot of hikers take a break here and do go into New York I personally could not stand the noise and stress of a big city during such a long hike - it was difficult enough to just get across the highway!
Eingestellt von German Tourist um 15:12