The art of honking or what is New Zealand like

I liked my time here in New Zealand but I do not think I will want to come back in the near future. On the other hand I want to go back to Australia very soon. Why? New Zealand is beautiful, nice and pleasant, but it is also very European. Australia on the other hand is so very different from anything I have seen before. Australia’s landscape is not as spectacular as New Zealand’s, but it is very special and almost magic. Also people are much more outgoing and hospitable. And don’t forget the kangaroos either….

But both countries have the same art of honking: If a car passes you giving you a short double honk it usually means anything from “I have also been cycling 20 years ago” over “I even break for cyclists” to “I like your cute little butt in bike shorts” or to cut it short: Double honks are friendly.

A single long honk on the other hand is a totally different story and they are generally not friendly at all: My interpretations range from “I had to slow down for you stupid idiots” over “I hate everything that moves and is not in a car” to “My sex life is a desaster”. On top of all that these drivers usually give you a honk when they are right next to you therefore scaring the shit out of me. 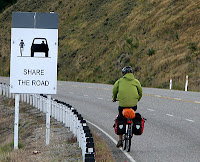 That said I also want to add that we generally did not have many problems sharing the road. There were some scary moments when trucks passed me too close and I hated heavy traffic whizzing past me at 120 km/h on narrow single carriageway roads, but generally drivers were treating us ok - not super friendly, not totally bad either, just ok. I am very curious now about Japanese drivers now!
Eingestellt von German Tourist um 00:38 No comments: 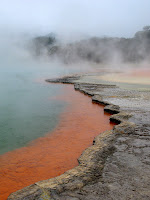 As soon as we had arrived on the North Island the weather improved - I don’t know whether this was coincidence or a generally warmer climate. The nights were warmer (which helped the cooking process of my 3 course dinners a lot!). I found the North Island much more interesting than the South Island - despite what all the guidebooks say. On the South Island nature is much more spectacular, but it is also spectacular in a European way - meaning that there is nothing unusual in it. On the North Island on the other hand there are a lot of striking features. First of all the North Island is of a very volcanic nature, so you see a lot of (hopefully extinct!) volcanoe craters and - most important for me - hot springs!

We enjoyed both features: First we did the famous Tongariro Crossing - reputedly New Zealand’s best one-day walk. Unfortunately, we were not the only ones to discover that. We were already warned when the shuttle bus to the trail head arrived full and we were told to wait for the second one, which arrived a minute later - and was also full. We had to stand up. When we arrived at the trail head we had to realize that we had not come in the only shuttle bus - there were plenty of them and they were all full, despite it being almost off season. And so we started climbing up the mountain followed by a constant stream of fellow hikers. There were so many people that it was impossible to even take a discreet pee! The flow of people never stopped - we were never ever alone for a second. The amount of people was rather off-putting, but the scenery was nevertheless quite impressive: Craters, lakes in unreal colours, steam coming out of the ground and temperate rain forest.

I have always loved hot springs, so I was having a ball on the North Island. We discovered freebie hot springs on dirt side roads as well as impressive spa towns like Rotorua. I had decided to celebrate my “alternative“ birthday there and received a plethora of birthday presents from John even including a very rich birthday cake and champagne!!! On top of all that we spent the day in a very posh spa relaxing in hot pools until we were thoroughly cooked. Most interesting feature in Rotorua though was the local museum displaying all sorts of memorabilia from former spa times. Patients were treated with radioactive water and electro shocks - all this seemed more like a torture chamber than spa treatments to me. 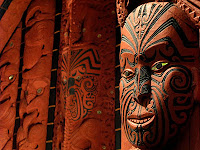 But then it was time to head back to Auckland. En route we passed a lot of Maori buildings which is the other interesting thing about the North Island. Most of the Maori population lives on the North Island which is reflected in all sorts of weird place names and Maori influenced buildings, churches and cemeteries. On our very last cycling day in New Zealand we had the very worst weather of the whole trip. It was just pouring down the whole day combined with a rollercoaster hilly landscape and the steepest ascend of the whole trip. This combination lead to me being totally soaking wet - probably more from sweating inside my raingear than from actual rain. After that shitty day it will not be a problem to leave New Zealand.

In Auckland we had booked ourselves into the Formule 1 hotel - yes, to my big surprise they have Formule 1 hotels in Australia and New Zealand. I am a big fan of these hotels and have stayed in many of them in Europe. The one in Europe came as a big surprise - ensuite bathroom and shower, plus even a little kitchen and balcony smack bang in downtown Auckland for the incredible price of 22 EUR per room!!! We are staying here for almost a week while preparing for our departure to Japan.

And yes, that is the next surprise: John is coming to Japan with me! He always wanted to go there and it might not be directly on his round the world route, but it is not that much of a detour either. Probably me cooking 3-course dinners for him every night might have helped him in his decision. Right now we are in Auckland indulging in All-you-can-eat-buffets, white chocolate and Formule 1 designer hotels - all stuff we will not be able to afford in Japan.
Eingestellt von German Tourist um 00:36 No comments:

We had planned to spend half of our time on the South Island and the other half on the North One. Things worked out differently: We ended up spending 5 weeks alone on the South Island until the weather became too nasty. The weather in New Zealand was a very changeable thing: In one respect we were very lucky as we did not have much rain. Even on the West Coast, the so called Wet Coast with an average yearly rainfall of 8 meters (!) we just had one really rainy day - that was all.

Unfortunately, we also had one day with snow (which melted pretty quickly, but it was still some sort of traumatizing experience to wake up by the sound of snow falling onto the tent). In another respect we were incredibly unlucky: 80% of the time we had a head wind - sometimes so strong that we could not cycle any more out of fear to be blown off the bike. And whenever we changed direction, the wind changed direction, too. I guess you can't have all the luck. In the end it just got too cold which was aggrevated by high humidity i.e. a lot of dew in the morning everywhere - you were soaking wet before you even start cycling. 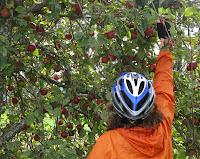 The South Island is reputedly the more scenic one. We saw a lot of temperate rainforest, 2 glaciers, some wonderful coastal stretches and thermal springs. Sometimes we would stand at the beach and look at snow covered mountains. I personally preferred all the apple trees to the rainforest, but that is just my single-minded personal view. By the way: I have never eaten that many apples in my life before than on this trip. 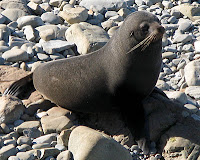 We even saw some interesting wildlife (beside the omnipresent damn sandflies that caused a lot of bit marks around my ankles): Seals! There are huge seal colonies right on the coast line next to a very busy highway (which does not seem to bother the seals at all!). In the end I was happy to move on to the North Island, where the weather was definitely better.
Eingestellt von German Tourist um 12:38 No comments: