I must admit that I feel a bit guilty about hiking a trail again instead of trying something new. But I have had so many problems on the other trails that I just needed a break and something easy!!! I had enjoyed the Bibb Track so much last time and I hoped I would enjoy it a lot even a second time.

Well, so far my plan has worked out! The weather has really been cooperating. It has been overcast almost all the time and that means that I did not get baked in the sun. I was surprised to see a lot more people on the trail this time. But the trail and the various shelters are still as nice as they were 2 years ago.

And I had 2 very unexpected re-encounters. I was hiking down Mt. Cooke one afternoon when I met a group of 4 hikers. I politely said hello, when one guy asked me whether I had hiked the Larapinta Trail this year. I was very much surprised, but it turned out that he was the hiker who crossed the first flooded stream on the Larapinta before me after the torrential downpour. And he remembered me! Very surprising considering that these two events happened thousands of km apart.

Next surprise came when I came into my first resupply town Dwellingup and entered the Visitor Information Centre. I was immediately greeted by the lady working there - she remembered me from 2 years ago! This is such a small world.... But maybe I have been in Western Australia now enough... 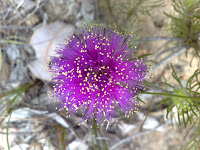 Four of my American and European long-distance hiking friends have hiked the Bibb Track as well - probably having been lured into it by my recommendations and raving reports. It is a fun game to track down their entries in the trail registers and read their comments about the trail. They all seem to have liked it!
Eingestellt von German Tourist um 07:21 4 comments:

Life in a kayak and a monastery

After all the misery on the Hume and Hovell I flew into Melbourne to have a couple of relaxing days. But my couchsurfing host kept me busy till 1 am with all sorts of business questions - and lots of trail talk as well. In exchange for all my good business advice I had free internet access and he put me in contact with another ultralight freak like myself, Franco. I have seen his posts on backpackinglight.com for years and was thrilled to meet him in person.

So one sunny afternoon I made my way to Franco - and stayed there for more than 4 hours talking ultralight tents. Or as Franco's wife put it: "You two go outside and play!" And this is what we did: We set up several tents and compared them thoroughly in Franco's backyard.

In the end I did not see anything in Melbourne but my couchsurfing host's apartment and Franco's backyard, but that did not really matter as I had been in Melbourne before. Eventually I flew on to Perth, which was a real breeze without dragging a bicycle in a bike box along.

I stayed with another couchsurfing host, Prudie, in Perth. This world is so small... Prudie, had been recommended to me by my German friend Rita, because Prudie had visited Rita in Frankfurt just a couple of months before. Prudie is a German and French teacher and therefore I could not only speak German again, but also learned a lot of new expressions.

In Perth I was met by Alan. You might remember him - I have met him in January 2009 while cycling in Western Australia and we have always stayed in contact. Alan is a great paddler and had agreed to give me some paddling lessons while I was in WA. If I proved totally useless for paddling, we would just go snorkeling instead. Well, I did not go snorkeling once and we spent 4 days falling in and out of a kayak (called wet exit and entry). That means I was falling in and out of the kayak whereas Alan was just giving advice while I was exhausting myself. After 4 days I managed to get back into my kayak in less than 3 minutes and also I will never win a prize for grace and elegance I get the job done - and that is all that counts. I even managed to steer around an obstacle course without embarrassing myself too much. Alan declared me fit for further paddling adventures on my own and while he left to get back to work I headed to a monastery!


Yes, that is right - I spend a couple of days in a monastery called New Norcia. I took the bus there that dropped my basically in the middle of nowhere. The only thing there is a huge Benedictine monastery - and I felt like in Southern Spain (this is were the monks had originally come from). The only thing to do there was to eat and sleep. The food was excellent and they even served wine with it!!! I slept in a bed again and even had air condition in the room. So much luxury.... I really needed this break after all the problems on my various trails.

But after two days I headed off to a trail again: Bibbulmun Track revisited!
Eingestellt von German Tourist um 06:42 1 comment: