The sections after Assisi were so close to civilization that wild camping was difficult and I opted for another hotel stay in Trevi. Between the two towns I passed close by to a Decathlon store and hurried inside to buy another gas canister and a replacement fleece cap for the one I had lost a couple of days earlier. As sunset was approaching I rushed through the aisles, grabbed a cap and went to check out. When it got dark and cold one hour later I took it out of my backpack - and discovered that I had bought a child's cap that did not fit my head at all …. 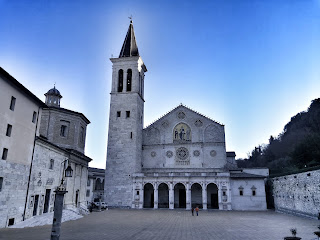 Next day I hurried up the mountain of Monteluco because I wanted to attend the evening service in the old hermitage there and arrived just in time to see the monks settle into their chairs - most of them with a smartphone in their habit. I left in the dark and miraculously found a wonderful campsite in the otherwise steep area. Next morning I got up early and descended into the town of Spoleto where I was looking for the cathedral in a maze of narrow cobbled streets. I was already getting annoyed because I could not find it - when I turned my gaze and looked right onto its majestic white facade. So early in the morning no tourists were in the plaza and I had the huge church almost for myself. 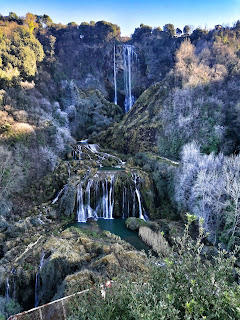 In the next section the Way of St. Francis passes the artificial waterfalls of Marmore which were not supposed to be running in winter - at least according to their website. But when I came closer I heard water rushing and could not believe my eyes: I had just arrived at the view point when water had been released from the man made reservoir on top of the mountain opposite. Roman emperors had already begun the constructions of these waterfalls which became a popular motif for artists in the 18th century. Unfortunately the official trail next to the falls was closed and my gpx track did not show the correct detour around them. After eventually finding the right way it had already started getting dark. My planned wild camping area was guarded by several loudly barking dogs and therefore I decided to hike on. This was probably my longest day of this trip because I only settled into my tent at 10 pm - at a site hidden by blackberry bushes. No cars passed by the entire night and morning - but of course when I was doing my morning constitutional two trucks came by hopefully not noticing me …. 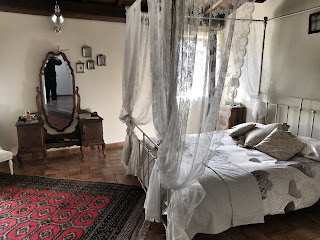 Another long day took me into Rieti where I had booked myself into a B&B. When I arrived at the address given on the booking platform I doubted my choice: It was an old dilapidated house in the old part of Rieti. I even had to phone the landlady, a very elegantly dressed signora who took me up several neglected flights of stairs. I was expecting the worst when she opened the door to the guest apartment - and could not believe my eyes: Inside was a beautifully restored medieval palazzo which could have been on the cover of Architectural Digest! This wonderful place even had central heating and a brand new bathroom - and cost a mere 35 Euro! 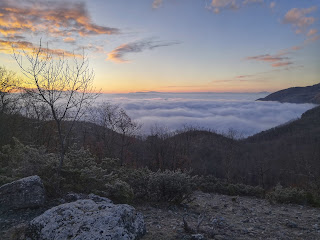 I had wanted to spend the next night in the monastery of Greccio which was unfortunately closed during winter season. I hiked on in total darkness and found a wonderful sheltered camping spot on the mountains above the monastery. It had such a warm microclimate that I was not in the least cold at night although up on the plateau even big water puddles were completely frozen over! I was greeted by this wonderful sunrise in the morning. I had perfect timing that day: The forecasted heavy thunderstorm hit right then when I was visiting the hermitage of Sacro Santo. 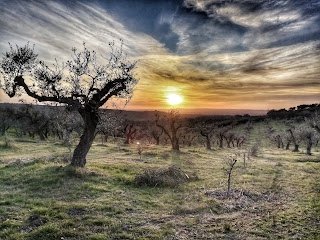 I had booked myself into a cheap hotel in Calvi dell Umbria where I was the only guest. Carlotta, the owner and chef opened the restaurant just for me and served a wonderful three course dinner - I even splurged on wine! My last full hiking day brought me through many olive groves and to Fara en Sabina, an old monastery and National Monument of Italy which can only be visited with a guided tour. Despite being such a popular tourist spot the tour guide did not speak a single word of English and made no effort whatsoever to make herself understood - such a disappointment. At least my accommodation that night in Montelibretti was great! 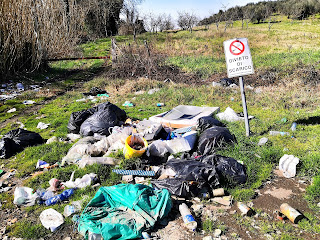 I should have finished my hike there because Montelibretti is well connected with local trains to Rome. Instead I chose to hike another - rather disappointing day. I encountered several wild garbage dumps - and the first other pilgrim of this trip! From Mentana I took the bus to Rome and riding the pilgrimage route into town I can assure you that it is not worth hiking! In Rome I had booked myself into another monastery and spent three great days sightseeing in the eternal city before eventually flying back to Germany.
Eingestellt von German Tourist um 23:22 2 comments:

As was to be expected in February my hike started in the rain. Luckily temperatures were rather mild. Right from the start the trail took me up into the mountains on paths and unpaved roads. This was very nice for hiking but I was soon covered in mud and looked like a pig after a mud bath. At this time of the year there are hardly any tourists. I was all alone in the hermitage of Camaldoli where I took a long break in the chapel. It was even more surprising that I was all alone in La Verna, a major tourist attraction - but the Cafeteria was open. Lunch was a bit disappointing though. The threatening clouds turned into a short hail storm when I left. 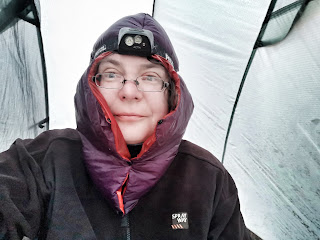 Due to short day light hours I  hiked well into the night on most days. When I was following a country in the dark a car with blinding lights came towards me - and not seeing anything I stumbled into the ditch and made a face plant. My pants ripped and most of my food flew out of the mesh pockets of my backpack … Luckily I didn't injure myself and could continue hiking and looking for a campsite. I ended up camping behind a pile of woods … Days became very sunny which resulted in nights getting colder and colder. I was never freezing in my warm winter quilt with a specific balaclava but I woke up to frozen tent several times and had to eat granola with ice cubes for breakfast because my water bottles had frozen over night ... 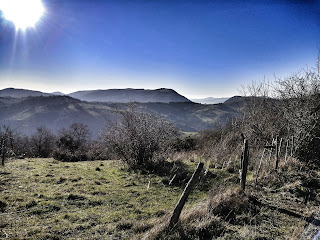 For the last night before Assisi a severe storm was forecasted for Germany. While I read about life threating weather conditions in my home country on the internet the forecast for Italy was only predicting a windy day. I took extra care in finding a sheltered campsite and was lucky to find the perfect spot right at sunset. Luckily the forecast was right and I slept through a windstill night. Then a last 30 km hiking day and I arrived in Assisi where I had planned to take the one and only rest day of this short trip. I arrived just at sunset and got this perfect shot of the famous basilica of Saint Francis. 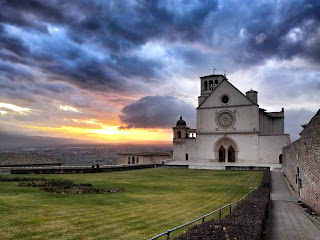 Like in Florence I had booked myself into a monastery which turned out to be quite international. With 30 nuns from all corners of the world this was a lively house whereas most other monasteries in Italy I stayed in had problems attracting new recruits. Assisi is a wonderfully spiritual place and a tourist trap at the same time. I spent hours in the magical basilica listening to the singing of the monks but was put off by the dozens of souvenir shops. (I had rather preferred supermarkets to buy some food ...) To wash clothes or go grocery shopping you have to leave the old town. I spent my rest day visiting the hermitage of Carceres which was very peaceful - until two bus loads of teenage school kids appeared …

Way of St. Francis: The idea

Between eventually finishing my third book and starting my book reading tour I had several weeks time for a hike - in February! Which is not the greatest time to go long-distance hiking in Europe.   Therefore I was looking for a trail in Southern Europe with a hopefully favourable climate and a good infrastructure in case the weather was not cooperating. I still wanted to go camping whenever possible and therefore was looking for a trail close to nature.


I ruled out trails in Spain because I have already hiked thousands of kilometers there and Greece because I’ll hike there in summer. Which left Italy where I have never done any long trail in the past – shame on me! As pilgrimage trails generally provide a good infrastructure (and lots of monuments for sightseeing) I very quickly came up with the Way of St. Francis which is also easily accessible via public transport. It runs from Florence via Assisi to Rome and both cities are low cost airline destinations. It is 600 km long which was ideal for three weeks plus a bit of sightseeing.


Still there was one obstacle: The trails leads up to more than 1000 metres in the Appennin mountains and there might be snow at such altitude. But this turned out to be a very mild winter and I could find out before departure that there was no snow even at the highest points of the trail. I flew to Bologna, took a bus to Florence and started my hike with a day of extensive sightseeing.