AT: Completely happily hiking in Connecticut

Life is good again! First of all I am experiencing a lot of trail magic. It started with a nice break in Salisbury, CT where I went to see Redmond and his sister in Pine Plains, NY. Redmond is American but has spend a lot of time in Germany where I had met him. It was weird to see him in the US for the first time. We had a great evening at his sister's place eating barbecued steak! I got all cleaned up (included my finger blister), washed my toxic hiker clothes and started to look like a normal human being again. And best of all the blister of my infected finger finally busted - I nearly fainted when all the puss came out, but the finger is healing pretty well now and I hope to be able to use all 10 fingers again pretty soon. Redmond brought me back to the trail and it took exactly 17 minutes before the sky had another one of its diarrhea outbreaks and all my nice clean clothes were soaking wet and dirty again...
Only 2 days later I am now staying with Radar whom I had met on the PCT in 04. He picked me up from the trail but he forgot to mention how far away he lived - it was a very long drive and I felt a bit bad about causing so much effort. We had not arranged an exact pick up place in town. Radar insisted that he would find me anyways through his hiker instinct - and he was right. He had first gone to the outdoor store where he was told that a tall German hiker had just come through. He had then tried the cafe assuming that I would eat breakfast and when he could not find me there he looked into the library where he eventually found me. Thruhikers are so predictable.... Radar lives in a fantastic huge house that feels like a luxury hotel. We even made a trip to the sea and ate fish and chips. It is so nice to talk trail all the time and exchange memories of the good old PCT times. I just wonder how long it will take until I am soaked again once I hit the trail.
﻿

But not only meeting old friends is nice, the trail has become really nice now, too. There are a lot of pastures and fields and even some nice relaxing (=flat) river walks. I am eating most of the time and I happily realized that everything is bigger in this country - not only the thunderstorms, but also the blueberry bushes which helps while harvesting them while hiking. They are so tall that I did not recognize them as blueberries first....
﻿﻿﻿

The only bad thing that happened recently that I finally met another sobo single hiker my age and as soon as I had caught up to her she had to leave the trail because of a sprained ankle. I still hope to meet you somewhere somehow, not Mother. I really admired her: She was hiking the AT despite suffering from MS - and she has such a positive attitude and some pretty amazing stories to tell about her life.
Eingestellt von German Tourist um 01:36 No comments:

AT: Happily hiking in Massachussetts 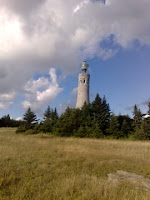 I finally made it into Mass and things are getting better every day. My infected finger is very, very slowly getting better - it least it doesn't hurt any more. The trail starts to resemble trail again and I can actually hike 20 miles per day again - if I wasn't distracted all the time by talking to nobos, going into town and eating or bad weather. I have met some interesting people, but unfortunately they are all going the wrong direction....
My time at the library is running out, so more is to come next time.
Eingestellt von German Tourist um 22:22 No comments:

Vermont is my absolute favourite state - eventually I am hiking again instead of rock climbing. There is actual trail here! And there are switchbacks! And there are places where to stealth camp and lots of them. But I did not understand why I encountered a short stretch of trail where people have built hundreds of small rock cairns.... Even the weather is good - it has not been raining for almost a week. Actually it is very hot, but anything is better than the tropical rain storms I had a week ago. And the landscape changed: I am hiking through pastures with flowers, there are a lot of raspberry bushes on which to snack and life is generally good again. I love Vermont!!!!! 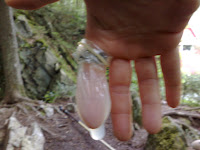 There is only one problem and that is a health issue: I have an infection under the nail of my right index finger (Nagelbettentzuendung or onychia) and it hurts like hell. First I tried to cure it with my own medical invention: In order to soak my finger while hiking, I filled soap water in a condom and fixed it around my finger. Pretty creative! This contraption earned me some pretty curious looks from other hikers.But it did not help much and I decided to detour to Rutland and see a doctor. The doctor prescribed antibiotics but so far it has not gotten better - but I have just taken them for 3 days. I can hardly move the finger any more (and I am right handed!), but at least it does not hurt any more like before. I do hope it will get better soon. If anybody has had that before and can tell me anything about it, please do!


Beside that I am getting worried about my appetite. I have been hiking for 1,5 months but hiker hunger has not kicked in yet. My dinners take forever because I just can't stand Lipton side dishes any more. And if I have to eat oatmeal again, I will probably scream. I still enjoy snacks, but I definitely do not eat enough I have been losing weight rapidly. Hopefully they have different dehydrated food in Australia...

I real highlight of this section was my stay with a trail angel in Manchester: The Green Mountain House. This is definitely one of the best organised trail angels I have ever met. Luckily he was recommended to me by another hiker from whom I learnt that you have to make a reservation to stay there - which I did and was accepted. Because of this reservation system Green Mountain is never crowded and actually feels more like a B&B than a hiker place. I stayed in a posh room that I only had to share with another lady and was treated with free Ben&Jerry's ice cream and soda pop. Because I am not used to caffeine I avoided Coke and still ended up having a sleepless night. When I wondered about that next morning my room mate informed me that the innocent sounding "Mountain Dew" that I had consumed in great quantity instead contained even more caffeine than Coke. Well, I have learnt that lesson now.
Eingestellt von German Tourist um 01:40 No comments: