From Zinnwald to Bohemian Switzerland

I started my hike on June 18th at the German-Czech border crossing at Zinnwald. Five years ago I had also started here but now I was hiking east instead of west. Back then it was freezing cold but now the sun was shining. But like five years ago I had problems with my camera. You should really test it before you set off on a big hike .... 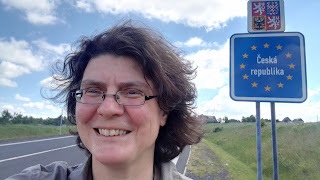 Still it was a memorable moment and I thought about all the things that have happened in these five years ... Shortly after the border crossing I encountered a nudist beach at a small lake. I was pondering whether to take a swim there or not and decided to hike on thinking I would come across more lakes later. I was very wrong! This was the one and only swimmable lake on my entire hike and I often thought longingly back to it! 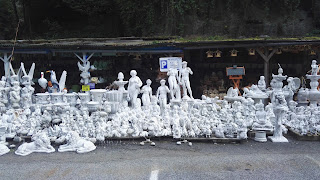 After two days I reached the border town of Decin and had my first resupply stop that took so long that I ended up hiking till 10 pm and 40 km to escape the road noise in the Elbe valley. Along the main border road there are dozens of stalls selling everything from underwear and leatherbags to these statues. At Decin I had also reached the European long distance trail E3 which I would now be following all the way to the Black Sea! 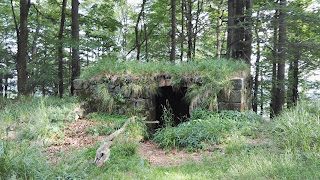 First landscape highlight of this trip was the Bohemian Switzerland with its bizarre sandstone formations. Of course this national park draws a lot of tourists and during the day I was hardly ever hiking without sight of other tourists. I personally found another attraction far more interesting. From 1933 to 1938 Czechoslowakia built a fortification line along the border to Germany consisting of almost 10,000 bunkers! And most of these concrete building do still exist somewhere in the forest although mostly overgrown.
Eingestellt von German Tourist um 10:59 1 comment: