AT: Trail magic in mail drops

But then my friend Wolfgang came to my rescue. He had already sent me resupply packages to the PCT and CDT. On the AT I sent him a long list of what food I wash craving - basically the German version of Lipton sidedishes. The package was sent to Pearisburg and resulted in a very happy German hiker. I could eat something different than Lipton sidedishes for a whole week. Sweet and sour noodles instead of Teriaky noodles. Tomatoe Mozarella instead of Cheddar Broccoli. I know it sounds ridiculous to non-hikers, but for a hiker this can change the world. Thank you so much Wolfgang!

But the biggest surprise came from Toek and the Netherlands. Toek and me had hiked whole New Mexico together and of course I had always been bitching about the American chocolate. So when Toek emailed me and volunteered to send a care package I was sort of expecting chocolate. But what finally arrived in Damascus exceeded my wildest expectations. Toek had sent me 12 (in words: twelve) pounds of chocolate. Good European chocolate. Milka chocolate, Fair Trade chocolate, Euroshopper chocolate. Milk chocolate, hazelnut chocolate, caramel chocolate. To say that I was overwhelmed is an understatement. I opened the package and could not believe my eyes. This chocolate will accompany me through the rest of the AT - I keep bouncing it ahead. Toek, this was the best birthday/triple crown present I could possibly imagine. I took pictures of it so whenever I am hungry I can look at it again. Toek, you are fantastic.
Eingestellt von German Tourist um 23:29 1 comment:

AT: West Virginia and Virginia

West Virginia and Virginia was a blast for me. I don't understand all this talk about Virginia Blues - I loved that state. The weather was really good and up to very recently it was so warm at night that I could use my sleeping bag as a blanket only. The very best were all these wonderful apple orchards along the way: Old abandoned orchards full with great tasting apples. Much better than anything you get in an American super market. I have never eaten so many apples in my life before. I even saw peach trees (well, not the biggest peaches in the world, but peaches) and persimmon trees (for Germans: Khaki). The hiking was great, too. Nice tread, pleasant scenery, nice towns. I love this trail now and I am sort of sad that it will soon be over....

In Harper's Ferry, WV I had the typical AT thruhiker picture taken in front of the Appalachian Trail Conservancy – and although Harper's Ferry is a pleasant historic town I did not stay because I could not find cheap or free accommodation. But I had a very nice encounter at Denton shelter. This very posh shelter even has a solar powered shower which I of course wanted to take advantage of. So in I went, locked the door, undressed and started showering when I heard a noise and turned around – only to see a very surprised looking bearded hiker staring at me. Apparently the lock on the shower was broken. He recovered pretty quickly from the surprise of finding a butt naked female hiker – and after finishing my shower (and being dressed again) we had quite a pleasant talk.
A couple of days later I stayed at a hostel where I ended up in talking almost all night long with Tina, the hut warden. She had hiked the AT the year before and encountered the great trail romance. She not only found a hiking companion for the AT on the trail, but now she was going to get married to him. I had of course heard of all sorts of trail romance stories but this sounded like a really successful one. (PS in 2011: They are still happily married now and have a child.) Well, I did not have any such luck on the AT: The only time I actually hiked with someone on the AT was for half a day in New Jersey where I had to defend a fellow hiker from the bears. Other than that I have always been on my own.

Well, once I had an unwanted 4-legged follower but this a rather upsetting story. I had hiked around those two hikers on the photo a lot and we even stayed in the same hostel one night. The hostel owner was a very charitable woman. So charitable in fact that she even took care of stray dogs. She had one magnificent hound dog that she tried to give away into good hands and those two hiker volunteered to take care of it. They wanted to hike with a dog on the rest of the AT and then take it home with them. The hostel owner was so grateful (and those two such weak hikers) that she even gave them a lift to the next shelter whereas I walked in the rain. 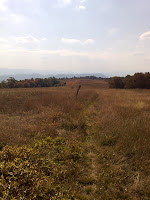 So when I get to luxurious Partnership Shelter (you can even have pizza delivered to it) in pouring rain my two friends are already there with their new dog. We have a little chat and I hike on - not noticing that the dog is following me. I only realise after almost a mile when it is very late to walk back with the dog. I am getting really annoyed with those two hikers: Why had they let the dog run free without a lead? Why did they not try to get him back? I tried everything to make the dog turn around and go back to the shelter: I yell in German and English, I gesture and I ignore it - but nothing helps. 4 miles later the dog is still around. In order to convince to dog to return to its hiker owners I try a last desperate remedy: I pick up a rock and throw it at it - of course I am aiming not to actually hit the poor creature. And eventually the dog gets the message and leaves me. I am almost heartbroken that I had to chase away this beautiful dog and really angry with its so called owners. Unfortunately I had to hear later from other hikers that the dog never returned to its owners and most probably ended as a stray dog again - very sad.
There are lots of interesting rock features in Virginia like the “Guilotine”: A rock balancing precariously above the trail that would surely crush you if it fell down – but it is stuck and does not fall. And of course everyone except me had their picture taken on ….. a rock shelf sticking out from the mountain with hundreds of meters of only air below you. This is the most typical AT photo but when I arrived it was so late that no one was around to take my photo.... Grayson Highlands were a last highlight in Virginia. Although I did not see much of the scenery due to really heavy fog I was all of a sudden approached by one of the little wild ponies roaming the area. 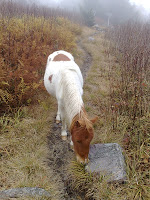 The smoothest hiking on the whole AT is the walk into Damascus on the Virginia Creeper Trail – an old abandoned railway. Dead flat easy straight hiking but still very scenic – and during the day you would run into loads of cyclists who are experiencing the Creeper trail as a day trip on rental bikes. Unfortunately people are walking their dogs here, too as I was nearly bitten by a very aggressive dog – with its owner not even apologizing!
Eingestellt von German Tourist um 18:44 No comments: