AT: I did it! The Triple Crown is mine!

A forest fire cannot stop a dedicated long-distance hiker and - hiking the triple crown you must experience one or you are not a real triple crowner. So on November 13th Flat Feet drove me around the forest fire (I would hike the missing portion on my way back) and I started to hike the last 17 miles. I wanted to take it easy and finish the next day, but then ambition set in. I had started the CDT on June 13th, 2007 so I thought it would be a good idea to finish the AT on that exact date 17 months later. It was a very eery day: Completely overcast, cold and extremely foggy - I did not see anyone else hiking that day. 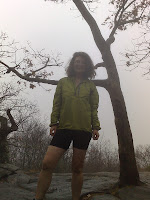 I just made it up to Springer Mountain with sunset - there was a little bit of sunlight left or I would have probably missed the plaque there. It was a pretty weird feeling, like "That's it now?". I managed to take some pictures and decided to stay at the nearby shelter and come back in the morning. There was nobody staying at the shelter. I set up my tent in the shelter which was a good idea because of all the mice. This was only my third time I had ever stayed in a shelter on the entire AT and in hindsight I know why. The mice were everywhere. I think I could not get used to seeing a mouse last thing before you go to bed and first thing in the morning. I actually had to put in earplugs in order not to hear their noise. 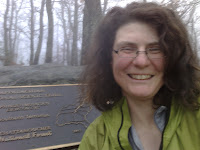 As a celebration menu I ate my favourite Knorr formerly know as Lipton side dish "Thai Sesame Noodles" and a highlight dessert: I had saved one bar of chocolate from Toek's wonderful maildrop for that occasion (Milka Creme de Caramel). And then I went to bed and fell asleep - I did not even have energy to listen to radio or read. I did not feel very special - it just felt like a normal day hiking. I got up next morning at 5.45 am as usual - everything even INSIDE the shelter was soaking wet from the fog. Even in Germany we do not have fog as bad as that. I ate Kashi cereal for breakfast and still did not feel special. Then I hiked back to Springer Mountain to take the official "I did it" photos which was kind of difficult because there was no one else around and I had to play with the timer nearly breaking the camera in the process. After taking about 50 photos and signing the trail register I decided it was time to leave and hike back to Suches. I still did not feel very special. 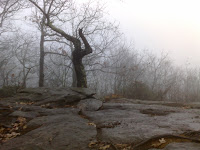 It was a miserably day - you could hardly see a thing and I thought that it was probably a good idea to finish my hike. I hiked back a different way I came and ran into a military manouver - there is a military base close to Springer Mountain. I don't know who was more scared: Me, because 20 soldiers hiding in the fog were pointing machine guns at me or the soldiers, who were confronted with a happily singing hiker in shorts in the rain. But probably those guys were used to hikers performing all sorts of weird rituals on top of Springer Mountain...

Later on another very unexpected thing happened: I ran into a bunch of nobo AT hikers doing trail magic. Believe it or not: They were sitting out there in the rain and fog with sodas and beer trying to get a fire started to barbecue some steaks. There are not too many sobo hikers out there so they could have ended up doing trail magic and nobody shows up. But we were all lucky: I met Silver Potatoe and Cracker there plus a father and son team. Silver Potatoe and Cracker had actually married on top of Springer Mountain two years ago - isn't that romantic? So we all stood around in the rain and fog drinking beer and sodas....

But I had to leave soon to hike my last missing 3.5 miles and meet Flat Feet. This is when it really started to rain hard. I ran into a leftover fire fighter and cursed the trail a last time for going over every damn mountain. Flat Feet had even hiked in a little bit to meet me and hike the last yards of my triple crown with me. By the time we arrived at his car we were soaking wet - and I was happy that the hike was over. I still do not feel very special. But from now on I can call myself: German Tourist - Triple Crown Hiker

Postscript: The only sad thing about my finish was the lack of a coronation party. In order to achieve the Triple Crown you have to "sacrifice" almost 1,5 years of you life and that usually deserves a big celebration. Most hikers complete their Triple Crown on the CDT - like my hiking buddy Toek whom I had the honour to coronate. In his "coronation ceremony" he was wearing a plastic viking helmet with 3 horns as a crown - each representing one of the three long trails. At that point in time I myself had only hiked 2 of them - as you can see in this picture taken at the Southern Terminus of the CDT - and so I could only were a "two horned" Triple Crown back then. 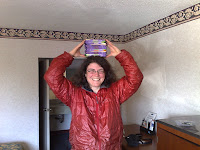 But only one year later I had become a Triple Crowner myself - albeit without a crown or party....because hardly anybody completes their Triple Crown on the AT, especially not in November and so I was all alone. I even had to take the finish photos with a timer. But I was compensated at least a bit for it by two events: Flat Feet gave me patches of all 3 trails to sew on my backpack or jacket. And when my German friend Maik came to visit me he brought a lot of my favourite German chocolate which we decided to use as a substitute chocolate Triple Crown.
Eingestellt von German Tourist um 22:40