As this has been my first long paddling trip I had to do a lot of research into the appropriate gear - and bought a lot of new stuff especially for this trip. Therefore I would like to give some advice on what worked and what did not: 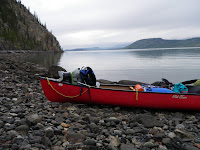 Boat: I had originally wanted to go in a foldable single kayak, but Adrian talked me into a 2 person canoe. For reasons explained in earlier posts this turned out to be the worst decision I have taken in a long time... But even taking the "divorce boat" aspect aside I think now that a solo kayak would have been the much better choice for a thrupaddle of the whole Yukon. The big problem on the Yukon, especially coming closer to the delta, is wind and the high waves dumping water into the boat. With a kayak you are far better off here than with an open canoe: A kayak is dealing much better with the wind and the spray deck prevents water from being splashed into the boat. Of course, you have less storage space in a kayak, but being an ultralighter this would have been not a problem. Also, it was much easier to find clear water than I had expected resulting in less storage space needed for drinking water. Another argument against the kayak had been the cold water temperature: Being much closer to the water in a kayak than in a canoe I had been afraid of getting cold. But other paddlers assured me that this has not been a problem for them, mostly because the air temperature is very warm during the day and the water gets much warmer once past Dawson. Also getting in and out of a kayak is much more difficult than in a canoe, but in hindsight I realise that we mostly camped on islands or sandy beaches where this problem would not have been an issue.

But my other new investments have proven to be very useful. Here is my list of the most useful items of this trip:

Tarp: We had bought a very cheap tarp of the sort you can get in any hardware store. This had come in very useful when we had to quickly get ashore and wait out a rain shower or when we had to cook in the rain. Keep in mind that the Yukon is bear territory and you will not be able to cook in or close to your tent.

Synthetic quilt: On a paddling trip like this you have a very high risk of getting your sleeping gear wet or at least damp. During the last couple of years I have had constant problems with down sleeping bags in this sort of environment: The down starts clumping together and the insulation factor drops considerably. Therefore I had invested into a new synthetic quilt from BPL and it turned out to be one of my best recent investments! To my big surprise I have never been cold at night with this new setup and I never had to use the down bag I had brought on top as an extra layer. Most nights I was just sleeping in my base layer and shorts and was plenty warm. Only on very few occasions I had to put on long johns and a second pullover. From now on the BPL quilt will be my default sleeping bag. 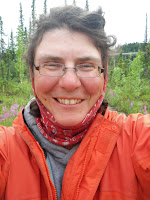 Buff: This little accessory turned out to be of great value on the Yukon and I was wearing it daily. Especially in the mornings it could still be kind of cold on the water - too warm for a warm hat, but the buff was just right then. And when the wind started blowing the buff was perfect to hold my baseball cap in place and protect my ears.

Waterproof socks: I had first thought of buying neoprene socks but a British friend told me about Chillcheater socks. They are not neoprene, but still waterproof and much more comfortable to wear. I heeded his advice and have not regretted it. The Chillcheater socks do not give much warmth: When it got really cold I wore thick socks underneath them and it worked well. But most of the time it was actually very warm or even hot - but still we needed the socks because of the mosquitoes, and then the Chillcheaters were just perfect! I would definitely take them again.

Stove: When hiking I always use gas canister stoves, but on this trip I was cooking extensively for 2 people and a gas canister stove is just not efficient (and the gas to expensive!) for this amount of cooking. Therefore I invested into a new petrol stove: The MSR Dragonfly. I had used that stove already for almost 7 months on my bike trip with John where his stove had worked great. Well, it turned out that it worked great on the Yukon, too. It was very reliable, used much less petrol than I had thought and most important of all, you can regulate the flame very well and simmer with it. This stove will definitely accompany me on future bike and paddling trips - but it is way too heavy and bulky for hiking.

Maps and guidebooks: There are tons of information about the most popular stretch of the Yukon from Whitehorse to Dawson City and we carried the German guide book by Dieter Reinmuth. The town info in this book is great, but the maps are rough sketches only and ok for navigation, but could be better. The much better choice is Mike Rourke's map guides of  the Yukon: He covers the Yukon all the way to Circle. His maps are impeccable and he gives a lot of historical information. The best overall guide book is the invaluable Dan MacLean: The Yukon River and its tributaries. For the section after Circle we were relying on US topo maps from Garmin. Unfortunately, the data base of these maps is over 20 years old and the river is changing constantly, therefore navigation was rather difficult with these maps. Still, they were better than nothing and at least they showed were the villages were located.


And now a last piece of advice: On the Yukon there are not many possibilities for staying indoors - especially if you don't want to spend a fortune on expensive B&B. Also you cannot leave your boat and gear unattended on the beach as the local kids are infamous for stealing stuff out of the boat. But there is one really nice hostel in Dawson City that is run by the German author of a Yukon guidebook: the Dawson City River Hostel. There is no electricity or running water in this hostel, but the place has so much atmosphere that is an attraction in itself. Plus you will meet all the other paddlers there, as it is close to the river and the hostel has carts to get your boat up from the river to the hostel.

The best free accommodation on the Yukon is in the Yukon-Charlie River National Park, where a lot of old huts and roadhoused have been restored and are now fantastic public use cabins. Definitely take your time in this stretch and enjoy the free accommodation.
Eingestellt von German Tourist um 04:55

How did you dispose of the canoe/divorce boat?
D

Hi Christine.
Your trip, despite the company you had, sounded great. I am hoping to paddle the Yukon this spring/early summer (june), and was wondering if you could impart some advice.
We are not particularly fast paddlers, and plan on doing the trip slowly and comfortably rather than doing long days and trying to cover lots of ground. We plan on paddling only from Dawson to the Dalton hwy, near Fairbanks. We thought that one month would be a good amount of time, would you say this is accurate? It sounds, from your blog (and other info) that the Yukon Flats section is the more difficult and time consuming. Is the flow here slower? Or is navigation the main problem? Given our plans to go at a slower pace, with your experience on the river flows, what sort of distance do you believe is achievable per day? And does this average vary a lot over the course of the river?
Hope you can help, and any other information that you think would be useful would be appreciated.
Thanks,
Mark Clavarino

First of all congratulations for chosing one of the best stretches of the Yukon River, Dawson to Dalton. You can very easily do that stretch in one month time even with paddling very slowly and taking lots of rest days. I personally liked the Flats a lot. We still had a very strong current in the flats that made steering and navigation difficult - there are so many channels and obstacles that you do not have time to decide where to go with a strong current. But when we decided to use side channels instead things became very relaxed and incredibly scenic. Even in the side channels there still was some current and we still managed to do 60-70 km days there. Your daily mileage on the river will vary tremendously but the determinig factor will not be the current but the weather. Wind and thunderstorms can force you off the river any time, sometimes for days on end. On a good day we paddled over 100 km, but sometimes the weather was so bad that we got less than 50 km in. Feel free to contact me via the email address given in the contact section of my blog if you have further questions.