I joined the South West Coast at Barnstaple still without a South West Coast Path guidebook. I had not been able to get the one I wanted in Bristol or any other town along my route. So I really pushed hard to make it to Barnstaple before shop closing time. I had even decided to reward myself with a stay in a B&B there. I reached the Visitor Information just 15 minutes before closing time on a normal weekday in October and asked them to book me into a nice B&B - only to find out that everything was fully booked! This was the one and only time I wanted to splurge - and then I cannot find accommodation.... I had to walk back for about 3 km to the last possible campsite I had passed without having indulged in a shower, laundry or other luxuries of civilisation. At least I had been able to purchase a guidebook 5 minutes before the book shop closed and was now able to plan the last days of my hike. 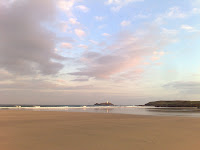 I must admit that I felt really tired and worn out by then. I had only about one week left to go but it seemed like an eternity. I just wanted this hike to be over - a feeling that I had not had before very often. I still wanted to finish but if I did not want to hate this hike I had to take it easy - and that is difficult on the SWCP that has constant steep climbs and descents. Therefore I made 2 decisions: Stay in hostels wherever possible to avoid camping in gale force wind and short cut the SWCP by flat road walking when quite country lanes offer an easy alternative. My first hostel stay on the SWCP was Westward Ho! This little town is really spelt like that - including the exclamation mark! The hostel was fantastic and I even had the whole dormitory for myself - an experience that should repeat itself in the two other hostels Boscastle and Perranporth. This was low season and hardly anyone else around except for the weekends when sometimes the whole hostel gets rented out.  The road walking was just a short experience: First of all because there were not too many feasible quiet country lanes, but mainly because I realised that the coast was really spectacular and even worth the constant ups and downs. The terrain on the SWCP varies from walking on sand beaches to rocky cliff top walking and is truly spectacular most of the time. As an added bonus there is lots of evidence of former tin mining. There are mine shafts and ruins of former industrial buildings. You can even visit a former tin mine which is right on trail - but I must admit that I could not be bothered to see it. On average I had 1.500 meters of ascent every day and that does not put you in sightseeing mood. At least the weather was behaving itself during this last week. Camping became my biggest problem: There was no shelter from the wind on the exposed cliff tops and the only chance of finding a decent campsite was in the small valleys or by venturing a bit off trail into a little patch of forest. It was difficult to tell from the map what the ground would be like but I was usually lucky and found a halfway decent spot. 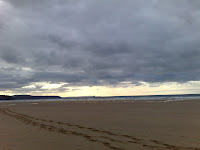 Eventually the end of my hike came into sight. I was counting down the days and hours and still feel a bit guilty about it. The SWCP is truly beautiful but I was not in the mood to enjoy it much. After a while all the rugged headlands and beautiful beaches looked pretty much the same to me. Most of all I was constantly worried about the weather changing. My hike had taken longer than expected and I was well into the second half of October. How long would this good spell last? Well, it lasted until my very last day on my thruhike - I was very lucky.


I finished on October 24th at Land's End in gale force wind that made walking difficult and even scared the tourists at this well visited tourist spot. It is so touristy that the famous "Land's End signpost" is owned by a professional photographer who does not allow individuals to take pictures of it with their own camera - you have to pay for that privilege.  I dutifully took some finish pictures, signed the John O'Groats to Land's End register, had a look into the gift shop and waited for the bus to take me to Penzance. My hike was finally over - thank God.
Eingestellt von German Tourist um 22:41