There were still plenty of hikers on this Northernmost section which is a relatively new part of the E1. Only a couple of years ago the DNT has finished to mark this last stretch of the E1 all the way up to the North Cape. Quickly afterwards a German guidebook was published which attracts many more hikers than I had expected. Shortly after Kautokeino I had my first encounter: a German lady was coming towards me in the rain. "Are you coming from the North Cape?", I asked her curiously. "No, I want to go there", she replied rather depressed. Before I could point out that she was heading in the wrong direction she poured out all her misery: She was hiking in heavy boots which had already destroyed her feet - three days after the start of her hike! I tried to cheer her up a bit with hot tea but she soon hiked on towards the main road to Kautokeino. "I'll probably spend the rest of my holiday driving through Northern Norway with a rental car. My feet hurt too much for hiking", she explained and stumbled onward.

The next hiker I met was also coming southbound - and was German, too. He hiked the E1 in sections and was carrying too much food like most hikers here up North. But this was my luck because he gave all his excess food to me including a big plastic jar of Ovomaltine which would refine my breakfast for the rest of my trip. He also instigated another interesting story: Earlier this day he had met two other German hikers on their way to the North Cape and they had chatted for quite a while. Shortly after they had hiked on he realised that they had forgotten one of their sandals used for river fords. They were already too far away when he noticed their loss. Therefore he had deposited the shoe right in the middle of the road in case they decided to hike back and get their lost shoe.

As I was heading in their direction he asked me to pick up the shoe and give it back to them. This sounded like a fun story and of course I agreed. I found the shoe shortly afterwards, picked it up - and eventually met the Germans the next day. I had passed them inadvertedly in the morning because their campsite was hidden, so they came up to me from behind when I was having a break on the side of trail. I had heard them talking in German from far away so I knew it must be them.
"I have something for you", I greeted them and showed them the shoe. The expression on their face was priceless! After I had explained how their lost shoe had passed them they rewarded me with German chocolate and a long chat at the little supermarket in Maze where we resupplied and had lunch. 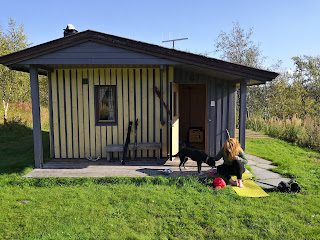 A couple of days later I was planning to stay in one of the last huts on the trail - and when I arrived late in the evening I found a Norwegian lady with a dog in it. Of course, she had the stove going and was happy about some company. Like several other women I met on this hike she was out on a fishing trip! In Scandinavia I met a lot more female hikers and hunters/fishermen than in rest of Europe. It was way too hot in the hut for me and therefore I slept in the emergency shelter next door. For the first time on this trip I had to use my headlamp at night. Summer was closing in and the sun started to set again. It got dark at night! Next day Ifound a huge Swiss army knife right on the trail. It was way too heavy for an ultralight hiker like me but so close to the end of the trip I picked it up and carried it with me. I asked anyone I passed whether he had lost it but nobody claimed it ...

Weather was still unusually good for this time of the year. But one evening I saw dark clouds approaching and unfortunately no real shelter in sight. I hid behind a mound and just finished pitching my tent when all hell broke loose and a torrential downpour came down for half an hour. After that it was nice summer weather again ... Typical Norwegian weather: it rained almost every day, but only for a short period. If you don't like the weather, just wait for five minutes and it will change. Rain was not my biggest problem now but the wind. The landscape was flat with no vegetation to hide in. I was always exposed to the wind and therefore I tried to camp as low as possible. 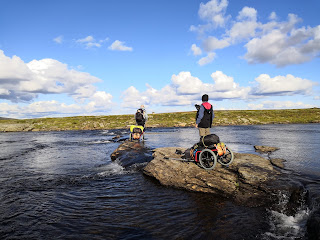 Next day I was just crossing a swamp with great difficulties when I saw two people ahead of me - dragging something behind them. I was wondering what they were doing and came to the conclusion that they must be volunteers from DNT out there marking the trail. Because for what other reason would someone drag a cart behind them? I finally caught up to them and to my utter surprise they turned out to be a father and son team with "pilgrim carts"! They hiked with carts instead of backpacks because the son was still too young to carry a heavy load and therefore the father had decided to use these carts. But he had already deeply regretted this decision: in this swampy and bumpy terrain with numerous river ford carts are more a pain than a help! I do hope they finished their trip without any major problems ....

I spent my last rest day in the hostel in Olderfjord where I did one last expensive resupply in the small supermarket. With only a few more days ahead of me I was now making plans for my return trip to Germany. I was most anxious about the weather. Since starting this trip the weather had been exceptionally good, in fact the hottest summer in Scandinavia in the last decades! But this great weather could not last forever. At some point winter would set in - and by then I wanted to be back in Germany. The forecast was still good though and I was hoping for the best. When I was about to depart from Olderfjord I even ran into Noe from Switzerland who took this picture of me. I left before him - and would not meet him again on this trip.
Eingestellt von German Tourist um 22:13