Germany to Italy: Görlitz to Hof

I started my hike May 31st - and for the first time I did not know at the beginning where this hike would eventually take me. A pretty bizarre feeling ... Of course, Deutsche Bahn was one hour late in getting me to Görlitz where I ventured to the bridge across the river Neiße and the German-Polish border. As a European it hurt me to see the busy border closed due to Corona, but I hope to be able to continue eastward from here in one of the next years. But for now I started hiking westward following the Ore mountain range. As I had already hiked these mountains several years ago on the "Kammweg Erzgebirge" I had chosen a different route this time - as usual mixing existing hiking trails. 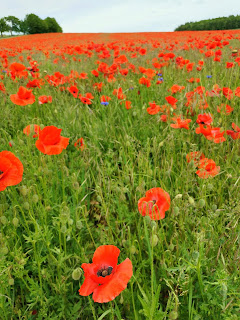 Corona caused an expected problem: As usual I was looking for water in a cemetery in Löbau, but the faucets were not connected to city water - and public toilets were closed due to Corona. It took me a long time to find a public faucet in the heat. I was not very fast hiking either as I was passed by a horse cart on day one. I must say to my defense that there were two horses drawing the cart vs. me as a single hiker ...
This pittoresque popeye field was ribboned off with warning tape. I had first thought that this was meant to prevent cattle from entering. But while I was hiking along the field several cars stopped and eager photographers jumped out to take pictures ... When it started to rain in the evening I hastily set up me tent - and promptly busted the seams of my old hiking pants who were apparently too old for another thruhike. As I would return back to Berlin for a short break I could luckily replace them. 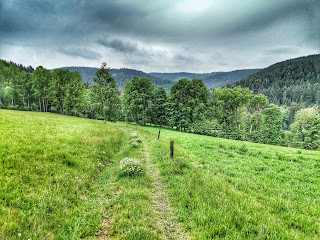 I had also two interesting encounters: When I had stopped in the small village of Klein-Dehsa to start a new podcast on my smartphone an older gentleman came running out of a nearby house asking: "Do you want a stamp?" It took me a while to realize what he meant: He is the local trail keeper and provided stamps for hikers like on a pilgrimage trail. The second encounter happened in the small town of Mildenau where I walked through pretty tired at 7 pm on my way to a hotel in Annaberg-Buchholz.
All of a sudden this guy showed up with my book in his hands asking for an autograph! It turned out that Norbert was a long-distance hiker himself who had walked from Eisenach to Budapest the year before. He was following me on social media and had calculated from my route map and my posts when I would approximately pass through his town. He had been waiting for me outside of his house on a bench. Of course I signed his book and we had a bit of trail talk until - alas - I had to leave him in order to get to my hotel in time. 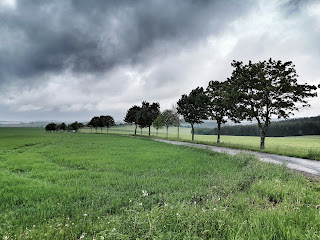 In Klingenthal I could do my good deed of the day at a bus stop where I was having my lunchbreak out of the rain and devouring some goodies from the nearby supermarket, when an older lady showed up. She had just been at the hairdresser for the first time in months and wanted to take the bus home - but unfortunately the strap of her face mask had broken and she could not cover her nose and mouth according to the regulations. Luckily I remembered that there is a tiny safety pin in my sewing kit - et voilà - I had repaired her mask just in time before her bus arrived!

This first section of my hike ended pretty wet and rainy in Hof after passing the "3-country-border" in the middle of nowhere. Here Bavaria (former West Germany), Saxony (former East Germany) and the Czech Republic (former Czecheslowakia) were bordering each other and the infamous "Kolonnenweg" led to the spot. During the cold war this trail had been used by border patrol and it was "paved" with concrete slabs with holes in them. Very hard on the feet and you had to take care not to step into one of the holes. The former German-German border is now a hiking trail called "Grünes Band" or "Green ribbon" but this concrete trail is the main reason why I am not very keen on hiking it.
Eingestellt von German Tourist um 20:44


Most enticing blogs I’ve ever read and this is what it should. Must be shared as well. I was really bored but your blog lightened up my day

Much obliged to you for sharing this blog, I read your blog about better twitter advertising tweets and your blog is extremely useful. Is data will help us a great deal.

Much obliged to you for sharing this blog, I read your blog about better twitter advertising tweets and your blog is extremely useful. Is data will help us a great deal.