As I have mentioned before there is not that much to see in Malaysia and therefore I jump to every opportunity to do some half decent sightseeing. The town of Miri does not boast many attractions, but it has a crocodile farm and there I went - not expecting much. But for once I was positively surprised. 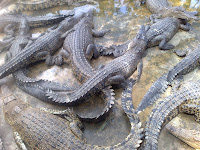 Of course, there were crocodiles - and lots of them! They were all comfortably lounging in a wonderful mud pool in the sun. They were even sleeping with their mouths open! Only about every 10 minutes there was some movement. But after closer inspection I realised that the crocs were maybe kept a little bit too close to each other, because a big number of them had missing or invalid limbs. Apparently they had just bitten off each others legs! I was very careful not to throw my camera, wallet or other valuable things into the crocodile enclosure - I guess the staff would not be too willing to retrieve it.

But there was also a mini-zoo with some debatable practices. There was a little monkey and bear on a leash - for snapshots with tourists. The poor animals were frantically running back and forth within their limited little radius - a truly disheartening sight. But at least I learnt that there are bears in Malaysia - something that I had never expected. They are called sun bears and they are truly small, but have an enormously long tongue for licking up insects, termites, ants, whatever. In the zoo you just feed them bananas.

The feeding was the most interesting part of my visit. I bought bananas and set off to find out who would eat them. Result: They all eat bananas in Malaysia - only the way differs. There are of course the monkeys and they just grab their banana, peel it in split seconds and it is gone. Their social behaviour was most interesting: In one cage the alpha male chased every monkey away that tried to get a banana from me. Of course I would not give him any, but he had decided that if he doesn't get anything, nobody else should either. Reminded me a lot of some human behaviour... I spent hours and 2 kilos of bananas with the monkeys. 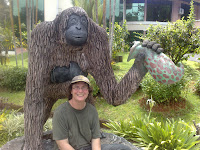 A week later I visited an Orang-Utan rehabilitation centre. The apes (monkeys have tails and therefore Orang-Utans are apes) are roaming freely in a huge nature reserve but usually come to the feeding area for the twice daily feeding with bananas. Of course there were loads of tourists - but also loads of apes climbing around in the jungle above. I truly regretted not having a better camera then! First the Alpha Male, a huge and very hairy guy called Ritchie had to be fed and then the rest of the group could eat as well. The babies cling to their mothers (one called Hot Mama because she bites at least one tourist per season) and the teenagers are running around catching each other. One was happily showing off his private areas for inspection and scratching his balls - making all the (human) girls giggle... Great photo shot if you have a decent camera - unlike me... The apes even drink milk out of bottles - but litter them after use!!!!
Eingestellt von German Tourist um 15:21

Love the picture of you with your John Deer hat.