I still have all my hiking gear with me so I was really keen on doing some hiking in Malaysia. Unfortunately, you are required to hire a guide in almost all National Parks here - except in Taman Negara, the biggest and most popular National Park in Malaysia. And according to my guidebook the rainy season there would also already be over.


So I took the "jungle train" from Kota Bahru to Jerantut, the portal to the Park. There were also 4 other Westerners in the train planning on hiking in the park. But the closer we came to Jerantut, the heavier it started to rain....Arriving (on time by the way) at the station I could not even muster enough courage to step out and search for buses to the park. I went to a restaurant instead and had lunch hoping for the rain to cease. But no such luck. Eventually I found the bus station totally soaked despite my umbrella - and found the other four Westerners. All of them had already given up on any hiking plans and bought onward tickets to Kuala Lumpur... Very encouraging. I nevertheless decided to stay, checked into a hostel and did some internet research on weather forecast with the devastating result that it was supposed to rain for the whole next week.

But hey, I had come that far and did not want to give up. So next morning I took the bus into Kuala Tahan, a small village just outside the park boundaries where all the guesthouses and restaurants were. Of course it was raining the whole bus trip...but cleared up when I had settled into my guesthouse! So off I went to my first jungle hike!!!! 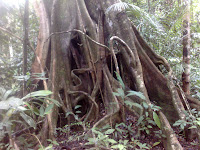 Well, I always thought that I am an experienced hiker and 35 km per day is nothing for me. I had to realise that jungle hiking belongs to a totally different class of hiking. First of all it is hot, usually around 30 degrees. Second, humidity is about 100% - you are sweating from just standing around. Third, due to the incessant rain and erosion all trails had been transformed into one huge mud pool. Fourth, the terrain is steep up and down all the time, climbing over huge tree roots holding on to ropes and slipping on muddy ground. Given all these premises you are luckily to hike 2 km per hour - and drink 1 liter of water/hour. Afterwards you look like a pig fresh out of a mud bath. I had to wash my clothes every day - but due to the humidity they would not dry, of course.

But the most nerve wrecking thing were the leeches. I am used to all sorts of insects and even to leeches - but not to these amounts of leeches. Every half hour I would stop and peel off another 10 leeches. And because of their anti-coagulant the little wound they leave will not stop bleeding. My socks turned bright red and seemed to attract even more leeches. I had always believed that leeches bites are not itchy and heal quickly, but I was totally wrong. Now, almost one week later I still have itchy bumps all over my feet. But the worst moment came when one leech had managed to climb up my inner thigh. I peeled it off, but the wound would not stop bleeding and in the end I looked like I was heavily menstruating and had forgotten the tampons. On my way back to my guesthouse everybody was staring at me...

I managed 3 days of jungle hiking and then I gave up. It has been a very interesting experience and I am glad I did it (even the weather cooperated and it rained only once per day), but this climate is not for me and extended overnight trips.
Eingestellt von German Tourist um 12:17

This makes the Bib and Heysen look like a doddle and also highlights the difficulty soldiers would have operating in the jungle.
D