The Florida Trail - canals without end 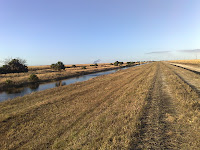 After getting out of Big Cypress, most of the FT is walks along canals. I have been hiking canals for 4 days now and there is still no end in sight....
First problem with canals is: water! Yes, water is always available in the canal, but you pay a high price. It can be very steep to get down to the water and you definitely do not want to fall into it after hearing alligators splashing into every 10 minutes. And when you eventually have found a good access spot and want to scoop out water, all you see is DEAD FISH! They are still everywhere. Killed by Florida's record cold they are  now slowly decaying in the water. I am used to pretty nasty water, but this is a bit too much. I share my water sources with alligators, poisonous snakes and thousands of dead fish. Great - I love it. I am very much surprised that I did not get more dehydrated. 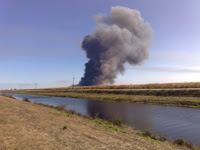 Second problem is that the scenery gets a bit monotonous. It is dead flat and the canal dead straights. Sometimes there is a little palm tree, but beside that it is sugar cane fields as far as you can see. As we do not have suger cane in Germany I first did not even realise what that stuff is. I still have not understood why the farmers burn the fields which looks like mini A-bomb smoke clouds. But I do understand now that you need a lot of trucks to transport the stuff and that I have to share the road with them.

Which brings me to problem three: Unfortunately, most of these dykes are paved now. My feet hurt like hell and I even had 2 blisters - and I never had blisters on the whole PCT or CDT!!!

But there are positive sides as well: I am right now hiking around Lake Okeechobee, which is the seond largest fresh water lake in the US. And I come through lots of little towns on the way. Floridians are not used to hikers and I have already been mistaken for a homeless person a couple of times - although tecnically I am a homeless person.... I was asked in a cafe by another patron whether I really had enough money to pay for my breakfast. I was stopped by the police while roadwalking - and ended up chatting with the guy for 15 minutes about his military time in the army in Germany. Today I passed Uncle Joe's Fish Camp and politely asked for a shower, which I was granted for FREE. And I am eating a lot of Mexican food.

But the easy times will soon be over. On Saturday I will do a last big resupply for 9 (nine!) days and will not hit civilisation again before February 10th.
Eingestellt von German Tourist um 19:31

It all sounds an amazing experience, it sort of makes me want to walk it. I know exactly what you mean about those sugar cane trucks, I had them for a day in Louisianna and didn't enjoy it one little bit.

Keep having and and keep posting, it is a good read.

Hi Christine,
It is good to catch up with your journey. It sounds great fun and an amazing experience. Without wanting to sound a wimp I'm glad I'm reading about it from the safety of my cosy sofa. You've certainly had me on the edge of my seat!! :-)