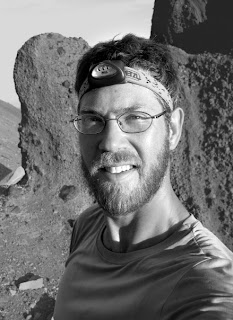 I have first met Dave and his wife Lexi on the PCT in 04. Like everyone else I was amazed by their home-made gear (although Dave admitted that their tent was leaking...) - and so Dave's trail name became Pacman. I could use his exceptional skills when my glasses' frame broke and Dave fixed it with Super Glue and a paper clip. The glasses held up for the rest of my thruhike. Dave taught my a whole lot of new words. And he beat me in arm wrestling (well, that was to be expected). When we approached Portland, we decided to all share a room there. On a very memorable night we watched Michael Moore's Fahrenheit 9/11 in the cinema and decided to get "shit-faced" (one of my new words) afterwards. Long political discussions followed that night.... Dave and Lexi finished the PCT just a couple of days after me.
Next thing I heard from Dave was that he and Lexi had a daughter and were asking me for advice on where to hike in Europe with her. I was thrilled about that challenge (I don't know anything about hiking with kids) and recommended the Salzburger Almenweg. I sent them my maps and was very pleased to find out that they actually hiked that trail and really liked it.
So when I hiked the AT in 2008 it was only natural for me to visit Dave and Lexi in Montpellier. When Dave picked me up from the trail I looked like a drenched water rat and was thoroughly fed up with the whole AT. Leaving their home 2 days later I was up to the AT challenge again and finished my thruhike. Dave not only sewed me a new stuffsack for my tent and treated me with home-made apple cider, he also volunteered to be my "trail manager". I left all my back up gear with him. When I called him a couple of weeks later because my tent was leaking like a sieve, he sent me my back up tent the same day (including some incredibly good Vermont chocolate). I remember leaving Dave and Lexi's home in Montpellier. I wanted to take a picture of both of them, but Dave had gone for a bike ride... This was the last time I have seen Dave.
I continued my round the word trip on foot and bike. When I was back in Germany for a short holiday Dave contacted me again with some bike questions. He told me about the Tour Divide and long emails about the advantages of a Rohloff speedhub followed - although Dave never got one. I was very interested in the Tour Divide and when I found out about his website I asked him whether I could put a link to it on my blog. "Link away!", he wrote in his last email to me. I just recently discovered that he has a link to my blog on his website as well.
While cycling myself through the US I thought quite a few times about Dave and the Tour Divide. Two days ago I was in San Francisco checking the warmshowers website (sort of couchsurfing for cyclists) when something subconsciencely caught my eye. It was the name Dave Blumenthal on the warmshowers homepage. First in disbelief, then in shock and tears I read a short notice and the newspaper link (http://www.rutlandherald.com/article/BT/20100625/NEWS/100629981/0/WW2). Dave had died in an accident with a car while MTB racing the Tour Divide.
I will never forget him.

My thoughts are with Dave's wife Lexi and his daughter Linnea.