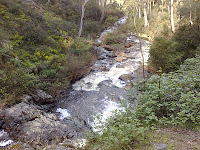 Now: Can I recommend this trail to a friend? Definitely NO!!!!! The Hume and Hovell wins the prize for the most mismanaged and worst maintained trail I have ever hiked! And this is a pity because the trail could be a real gem.

Let's start with the good things: The trail goes through some really wonderful landscape and forests. You will see wild waterfalls, lots of wildlife and more temperate rainforest than you expected. Truly beautiful stuff that I have not seen on any other Australian trail.

There are really nice campsites all along the trail spaced about 10 to 25 km apart. They all have a toilet and a covered picnic area plus some more or less decent camp spots. They either have a water tank or access to water. And hopefully by the time you hike it the flood damage to some of these campsites has been repaired.

Now let's come to the not so good things: It appears to me that this trail has been created with a lot of funding and energy. It must have been really nice when it was first opened. But then either the funding has been cut or the energy has vanished or both, because now it is totally neglected...And this causes various problems: 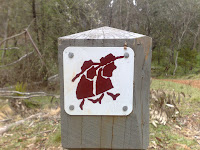 The waymarking: The trail is marked with wooden boards (totally over the top) or wooden/metal/plastic poles in the ground. In many cases these poles have disappeared or are overgrown making navigation extremely difficult. It is a total mystery to me why they just did not use blazes on the trees. They are much cheaper and cannot be brought down by animals. And there are trees everywhere! This combined with the fact that the trail is usually too overgrown that it is not recognisable make navigation a nightmare in places. Also there are no regular spaces between markers. The waymarking on the Heysen Trail was somewhat sketchy in places too but you could count on the fact there should be a marker every couple of hundred meters. If you do not see a marker for a km you have lost the trail. Not so on the Hume and Hovell: Sometimes there are markers every hundered meters and sometimes there is none for 10 km!!!!!!

Maps / Waypoints: There is a decent set of maps for the Hume and Hovell but the scale is 1 : 100 000 and that makes navigating with a GPS going cross country really difficult. The Heysen Trail has its complete track with waypoints on the website making navigation really easy. Unfortunately there are no GPS waypoints for the Hume and Hovell - not on their official website nor anywhere else. I was sort of lost almost every day...

Trail conditions: The Hume and Hovell uses a mix of about 50% old forest roads (thank God for that), 10% paved roads and 40% foot trail. Usually I would rather hike on foot trail than anywhere else, but not on the Hume and Hovell. The foot trail has been created about 10 years ago and sometimes it looked to me that they have not done any maintenance ever since. Foot trail was generally so overgrown and/or full of blowdowns that you are down to 2 km/hour of less. I scratched my legs and arms with all sorts of poisonous bushes, grasses and trees and I still look like an accident victim. I even tore my backpack climbing over blowdowns.
﻿﻿﻿﻿
Trail management: Due to the bad weather there were all sorts of detours and closed sections on the trail. This can happen to any trail - but at least you can warn the hikers!!! Not so on the Hume and Hovell! There has been a construction site causing a detour for over a year and there is no warning about it on the website or on the trail!!! Same thing for damage due to landslides or flooding! And there is an official trail coordinator for the Hume and Hovell... This was one of the most disappointing things for me - I ran into all sorts of trouble that could have easily been avoided if I had been warned beforehand. If you decide to hike the trail you definitely have to contact the trail coordinator beforehand: When contacted directly he answers emails very quickly and extensively. Just don't count on information on the official website or on the trail.

Bottom line: The Hume and Hovell could be a great and beautiful trail - but due to mismanagement and negligence is has turned into a hiker's nightmare. It is such a pity....
Eingestellt von German Tourist um 02:01

Hi Christine,
It seems all the rain has washed away the Hume and Hovell Trail. You can contact me at dpmart@tpg.com.au
D

This article is one person's impression at one point in time and is unfair as an overall impression. At times nature can be challenging. You were lucky to hike through that area in the middle of a natural disaster which was repeated less than two years later. Fortunately in 2014 much of the damage is being repaired but hiking trails are not the top priority when towns are without even proper water supplies.