Malaysia and the Islam

One of the things I was really worried about in Malaysia was the influence of Islam. I have travelled in other Muslim countries before and mostly it has not been much fun for a single female. Malaysia is officially a Muslim country, but being such an ethnical mixture it is a pretty relaxed country. Almost half of the population is non-Muslim: The Chinese and Indian.

So let me start with the positive thing: Malaysia really is a very relaxed country. I did not get any of the aggressive hassling I had encountered in North Africa. Actually, I was not hassled at all. But on the other hand I have seen a lot of women in head scarves - and that always makes me feel uneasy. I talked to a Malaysian woman about the headscarf and got a very interesting answer: Malaysian woman like the scarf because this way they do not have to worry about their hair cut!!! Whether this is true or not - I cannot tell.... At least the women here wear bright and colourful scarves and dresses. Only occasionally you see a woman in a full black burkha - and those women are obviously not Malaysian, but Saudi women on a holiday in Malaysia. You only see them in posh shopping malls...

After visiting loads of Malaysian museums I realised another interesting thing. In photos taken before the 1980's Muslim women hardly ever wear headscarves. But after that - up to today - every official portrait of a Muslim woman shows her with a headscarf. On the other hand Chinese women in Malaysia are running around very "lightly" clad here - they would arouse curious stares even in Europe!

Every bigger town has some sort of Islamic museum where you can learn about the Muslim way of life. Mostly these museums are pretty boring, but Kuala Lumpur has a huge Islamic Art Museum that was really fascinating. I was really impressed - until I starting browsing the books in the gift shop. To my big surprise there were a lot of books in English, even children's books. To my great horror I read in a children's picture book that a true Muslim must hate "Jews, Christians and others who are in the way of Islam". Things got even worse when I went to the adult section and started reading a book about how to become a pious Muslim woman: I learnt that a Muslim husband can beat his wife if she does not obey. I also learnt that a Muslim woman should never give birth in a hospital because she might be seen and touched by male doctor there. Luckily they closed the bookshop then before I could read more and get even more upset! 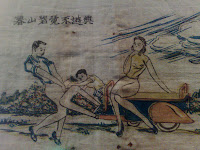 This photo shows an exhibit in the Malay police museum. This innocent looking handkerchief has been confiscated by the police because if you fold it in right way it shows a pornographic picture.... I don't think that many Westerners would go for such a subtle pornography.

Today I went to the Art Museum and there I was expecting a lot of critical modern art, especially some critical outlook on Muslim fundamentalism. But to my big surprise there was absolutely nothing in that direction. Most art works even had an explicit artist's statement - so I am quite sure I did not miss anything. Instead of seeing some critical statements on fundamentalism I was totally surprised to the complete opposite. One artist talked about  "Zionist attacks" on innocent Muslims all over the Muslim world and some installations were even glorifying Koran texts. A lot of artists called themselves "Muslim" artists. There were hardly any female artists exhibited.
Eingestellt von German Tourist um 11:28

Head scarves are a subject of ongoing debate in Australia so your comments were interesting.
D

can not take photo in police museum ;P naughty!

Found your site because I tried to take photo of the handkerchief and it didn't come out well.

Also, the image on the handkerchief is very old.. probably confiscated in the 1930s, so it's not really comparable to western pornography.. even us in the west probably had these kind of images back then! Lol