A hike through Germany: Swabian Alb

After Rottweil is was climbing up to the Schwäbische Alb (Swabian Alb) which is a 300 km long escarpment. The Schwäbische Alb Nordrandweg follows this escarpment for its whole length on the Northern side, whereas there also is a similar trail on the Southern side. Although this escarpment is not pronounced all the way it is quite spectacular for most of the way. The escarpment is up to 300 m high and therefore the views are fantastic. The high plateau is not very populated for German standards as the soil is very poor - but it is ideal for hiking. The trail itself is very old and has been created already 100 years ago. Although it is fairly well marked and there is even a specific map set and a somewhat outdated guidebook the trail is not very popular. I hiked it over the Easter holidays and there were a lot of day hikers out there (this is very close to the urban centre of Stuttgart), but I did not meet a single long-distance hiker. It is a shame that this area is not more popular as it has been a real highlight.

Beside the views and nature there is also a lot of cultural stuff to see. Wherever there is a mountain the Germans built a castle and therefore there was castle after castle along the escarpment. Of course most of them were mediaval castles in ruins, but some have been restored and can be visited - and some are even still lived in. My favourite is Schloss Lichtenstein (which has nothing to do with the tiny state of Liechtenstein!). Lichtenstein had been built in the middle ages and fallen into disrepair.This castle still played a little part in the history of Wuerttemberg during the reign of Duke Ulrich von Wuerttemberg who was expelled in a civil war in the 16 th century and had to hide in a nearby flowstone cave. The cave can be visited as well and I of course did it, too. He later restored his reign and became famous for introducing protestantism into Württemberg. Three centuries later in 1826 the German author Wilhelm Hauff wrote a novel about the (in)famous Ulrich von Wuerttemberg and called the book "Lichtenstein". One of the descendants of Ulrich von Wuerttemberg was so impressed by the book that he decided to rebuild the castle in the Neo-Gothic style at its old location and call it Lichtenstein again. The castle was really rebuilt in 1842, damaged again at the end of WW II, restored again and can now be visited. Of course I did that and even bought the novel "Lichtenstein" which is now my latest reading material. Literature does have an influence! 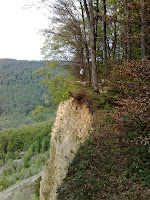 The escarpment is still moving and only 10 years ago 30 meter wide and a couple of hundred meter long stretch collapsed after heavy rainfall. The whole area has been converted into a protected geo park where you can see the bare layers of rocks and nature regaining the bare soil. Sign posts warn you everywhere not to stand to close to the edge...

The Swabian Alb also brought another culinary highlight: Maultaschen. This is a sort of giant ravioli filled with either vegetarian or meat filling. I was told that the dish was first introduced in the middle ages when people were not allowed to eat meat on Fridays. Therefore they developped Maultaschen, were the meat is hidden inside the dough and God could not see what they were eating.... Maultaschen can nowadays be bought in any supermarket and are ideal hiker food. You just put them into boiling water, let them heat up for about 2 minutes and then they are ready to eat.
Eingestellt von German Tourist um 16:46