The Ohio River was one big bad surprise: It is as big as the Mississippi and the two rivers combined create on big monster river that seems to be endlessly wide. And such a huge body of water is a real problem in wind as we already knew from earlier stretches. We were not happy! And I had even more cause for grief: I had pulled a muscle in my neck so badly that I could hardly turn my head anymore. Sleeping was almost impossible as I could hardly find a painfree position for my head at night. And of course paddling all day long did not help to heal my neck. Even during the day I was in pain and did not know how this would effect my paddling trip on the long run. I would not be able to paddle like this for 3 or 4 more weeks. I needed a break and therefore we decided to have a town stop in a place called New Madrid where we wanted to stay two nights.

The whole adventure started very positively as we found a good place where to hide the boats and the walk into town was only about 20 minutes along the edge of a field. But what had looked like a decent sized town on the map was a pretty deserted place in reality. No super market, only a tiny general store that did not sell any fresh fruit or vegetables. And the only place to eat in town was a grotty gas station with a tiny AYCE buffet. But what looked like a disaster turned into a great town day. The gas station buffet looked horrible and people smoking inside did not improve that impression. The state of Missouri still allows smoking in restaurants! Everyone in that gas station looked like right out of a John Grisham novel and I could hardly understand what everyone was talking about because of their Southern drawl. But eventually I found out that the buffet was 6,99 $ and this being the only choice in town I resigned myself to it. After the first bite of chicken I could not believe what I tasted there: This was one of the most delicious pieces of chicken I had eaten in my entire life. Real Southern cooking! And the chops and ribs were equally good! The place looked horrible, but the food was incredibly good. Thus fortified I ventured into the local museum that displayed the usual hodge podge of things, but focused a lot on the big New Madrid earthquake in the early 1800's, one of the biggest earthquakes in the US. I spent a quiet entertaining hour in this little museum and ventured on into the local library with internet where I finally wanted to buy a flight back to Germany.

I had done a lot of research on cheap flights back home and the cheapest solution seemed to be Iceland Air. Flying with a kayak makes the baggage allowance a big issue and Iceland Air still allows two bags for trans-Atlantic flights. But when I finalized the purchase on the internet the booking confirmation just stated 1 piece of luggage! I nearly freaked out and immediately called Iceland Air. What followed was one hour of intense discussion with Iceland Air customer service where I learned that international regulations have changed - although I could not confirm their statements on the internet. Now the first airline on a multi-leg flight determines the baggage allowance - before it used to be the airline with the longest distance of the whole flight. And unfortunately the first airline on my booked flight was American Airways, that allows only on bag. Luckily the customer service person was very patient and helpful and after moving the flight one day forward we found a flight combination that allowed two pieces of luggage - and no change or cancellation fees. Although all ended well the whole procedure was a nightmare. 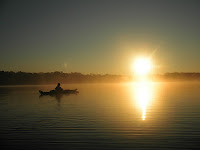 Because we could not resupply in New Madrid we had to stop again only two days later in Carruthersville. Again we found a good place to hide our boats, had a 15 minute bushwhack and emerged into Carruthersville on Thanksgiving Day - only to find that almost everything was closed. We trudged to the super market and after some emergency breakfast decided to stay the night there. We found a really cheap motel for 38 $ per room that turned out to be one of the worst dumps I have ever stayed in. I was especially scared of bed bugs and was terrified when I found a huge black insect crawling out of the bed. I heroically caught it and brought it to reception demanding a new room. The Indian receptionist only stoically told me that this was not a bed bug, but a cock roach and proved it by showing me a picture on the insect spray that she kept handy for apparent reasons.... Although the place was still a dive, she was right. I survived the night un-bitten. In the evening we called the free casino shuttle service and got a ride to the casino restaurant, the only place in town that was open on Thanksgiving. We had a great 9,95 Thanksgiving dinner, did laundry in the adjacent RV park and retreated to our little dive with the free shuttle bus. The night in the motel did me a lot of good: My neck pain slowly subsided and two days later I am back to normal.

The next days were pretty warm but increasingly windy - with the wind coming from the South directly into our face. The last day before Memphis we just could not paddle any more - the wind was just to strong and the water too choppy. When coming out of a narrow bend I had apparently misjudged were the shipping channel was. Although I thought I was safely out of it an upstream barge thought differently and I was yelled from the barges loudspeaker. Alarmed I looked around and saw the barge behind me coming directly towards me. I paddled like crazy into the brutal head wind to get out of its way and finally it turned and angled away from me. You are never bored on the Mississippi...
Eingestellt von German Tourist um 06:16

Hi I really enjoy reading your blog. The Mississippi trip is great because I used to rock climb at the Mississippi Palisades in Illinois (across from Iowa). I know the area. I currently work for a giant German software company and enjoy the cultural perspective/shock you experience in Mid America :) Cheers!