The Mississippi has been a fantastic trip and it has by far exceeded my expectations. Despite all the different problems encountered I really liked it and yes, I would definitely recommend it to a friend. Overall I have been very lucky on this trip. Although cold, the weather has been very kind with lots of sun, very little rain, tolerable winds and hardly any fog. Neither of us has capsized, lost the boat or had any major accident.

But although a great trip, it has also been very hard on me. I had to deal with lots of very different problems: a too late start, some unusually cold weather, a record low water level, my lack of paddling skills and problems with my paddling partner. But I want to emphasize that all those problems were due to planning errors and a climatically unusual year. As a rookie I suffered a lot more than an experienced paddler, but I also learned a lot. Not since my first long distance hike on the PCT in 2004 have I learnt so much in one single trip. Like us all the other paddlers we met were either beginners  or intermediate paddlers. You don't have to be an experienced paddler to survive the Mississippi. 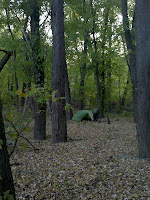 But what made the Mississippi such a great experience? For me the most positive and surprising fact was how remote the Mississippi felt almost all the way. I had expected a heavily populated,industrialised and polluted river but almost the contrary is true. Usually the only signs of civilisation are the barges and the train noise. There are industrial installations along the river but they are very much concentrated around the bigger towns. There were very few towns along the river and especially on the lower Mississippi the only thing you can directly see from the river are floodplains. The towns are usually miles away behind the levies.

This remoteness had a lot of very positive effects. Free camping on the shore and on islands was generally very easy. I had been warned about noise pollution but did not find it very bad. I got very quickly used to the sounds of a passing barge and usually there was no or little noise from roads. Only in the middle section the train horns were rather annoying.

The wildlife was incredible, of course especially the birds. I saw hundreds of bald eagles, pelicans and herons. Beaver and deer also abounded. Fish were jumping out of the water. And due to our late start we did not have a mosquito problem. The water quality was surprisingly good. Brian drank water straight out of the river without any treatment all the way to Minneapolis and did not have any problem. And even after that the water remained pretty good and hardly any trash was floating in the river.

I also enjoyed the variety on the river. Each of the three stages is very different and keeps you busy. From the source to Minneapolis the river is free flowing and relatively pristine. Here you'll encounter most wildlife and if you have only a limited amount of time this is the most scenic section. There is not much current and we did about 20 - 25 miles per day.From Minneapolis to St. Louis  the river becomes very wide, but lots of side channels and islands provide scenic views and variety. You'll encounter the first barges although due to the locks the barge traffic is still very limited. The barges can only be up to 15 containers big and this year we only saw an average of 3-4 barges per day. The biggest challenge in this section are the locks that can be rather time consuming. Due to the locks and dams there is no or minimal current in this section and we made a maximum of 25 miles per day. After St. Louis the river becomes huge and can be almost intimidating especially after the confluence with the Ohio. Wind becomes a real problem. Barge traffic increases dramatically and we saw up to 20 barges per day. The Mississippi has tons of 180 bends in this section where the barges cannot pass each other and pile up waiting. The barges also increase in size and become monsters up to 35 containers big. You'll encounter a consistent current of 3 miles per hour and we did 40+ mile days.

I also enjoyed the cultural aspect of river in its towns. Of course there the four main cities Minneapolis, St. Louis, Memphis and New Orleans, but I actually enjoyed the small towns even more. My favourite was the Mormon town Nauvoo. The Southern towns like Vicksburg and Natchez were very interesting, but rather rundown and definitely not as pretty as expected. A nice little bonus for paddlers are the AYCE buffets in the river casinos in the South. And of course: Don't miss the Southern cooking, the great BBQ and the seafood.

A last amazing aspect were the people we encountered. On no other trip have I received so many acts of kindness from strangers and I want to use this opportunity to thank them again for their help. We were given rides, food and places to stay. Whenever we needed help (and we needed it a lot!), miraculously a friendly person would show up and help us out.

The Mississippi has been a truly epic trip and should be every paddler's dream. Still, it is not very present in the media and you hear very little about it. There is no Mississippi paddling guidebook and only very few blogs. The Mississippi would deserve much more attention. Don't let an unjustified misconception of an industrialised river deter you from a paddling trip on the Mississippi - its beauty is gravely underestimated.
Eingestellt von German Tourist um 18:07

CONGRATULATIONS!
and I loved the story;..
can't wait for your next adventure!
Best,
Dubrock

Well done. Another epic trip for us all to marvel at.

Fuck yeah Christina, you get my inspiration aroused!