In Flensburg I crossed over into Denmark - on a tiny little path through the woods. To my utter surprise this border crossing point was staffed: Two Danish policemen were controlling it - despite the Schengen contract. I guess this is the result of the European refugee crisis. I asked the police guy if he wanted to see my passport. "Yes, please!", he answered. "Although you don't look like you'd be carrying an illegal Afghan refugee in your backpack!" Once on the Danish side I detoured a bit from the E1 that is called Haervejen here because I wanted to stay at one of the designated free Danish campsites. And what a great campsite it was: Right from my tent door I had a great view over the Flensburg Fjord. I left my tent door open at night and watched the moon rising over the Fjord and listened to the soft waves of the Baltic Sea - it was a great night!

Next day brought a nice surprise: At midday I saw three hikers sitting directly on the trail. Since I had not seen any hikers for many days I stopped to chat. And then it turned out that I had stumbled across Sven Lewerentz who runs a website about the E1! Sven was accompanied by his girlfriend and his mother. His 76 year old mother had started to section hike the E1 already 30 years ago and she has passed on her passion for the trail onto her son. 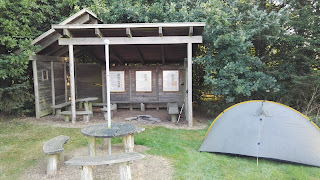 We chatted so much that it was almost dark when I finally got to my planned campsite - one of the luxury picnic shelters of the Haervejen. The Haervejen offers a lot of hiker ammenities: Lots of shelters, great waymarking and because it is a pilgrimage trail most churches along the way are open during the day. Plus Danish cemeteries all have water taps and mostly even toilets! I was a very clean hiker on this stretch of trail....

I even received trail magic on Saturday: In the village of Jegerup I decided to have my lunch break. I headed over to a nice picnic pavillion in the village centre when an older lady stopped me to tell me something in Danish. I don't understand much Danish but "gratis frokost" seemed to mean "free food" and so I immediately followed her invitiation into the parish hall. There I was told the whole story: Today was the yearly village festival where everyone in the village contributed something to a big brunch. And of course I was invited! Unfortunately I was a bit late but there was still enough left for a hungry hiker. So today was smoerebroed instead of packaged noodle soup!

On September 19th I finished my hike on the E1 for this year in Egtved. I had already hiked the E1 from Gothenburg in Sweden to here the year before - so this was the perfect finish place for me. Now I only have to hike 3000 km more and I will have finished my European South-West traverse from Tarifa to the North Cape! But before I took the train back to Berlin I visited two old friends: Neil and Anna, who live close to Himmelbjerget, the highest mountain in Denmark. This was my third visit to them: the first time I had come on bike on my bike trip around the Baltic Sea and the second time when I had hiked from Gothenburg to Egtved. Only now they are three: their son Alfred is now nearly one year old....