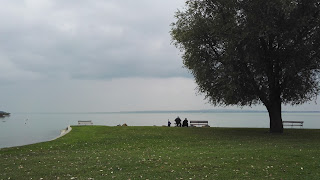 Although only October Lake Balaton was practically deserted. There were endless rows of holiday apartments and and they were seemingly empty. Waiting out the rain in front of a Lidl I met a fellow German who owns a summer house here and he gave me some interesting insights. Before the wall came down in 1989 tourism was booming here in Hungary because this was one of the few places where East and West Germans could meet. But ever since tourism is declining and hotels are empty - even in high season. We chatted a bit and then I left - trusting the weather report that had forecasted only a bit of rain. 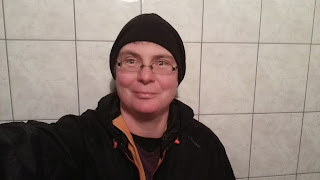 Unfortunately it was totally wrong. Rain poured down for hours and I was soaking wet when it got dark. Luckily there was one of the very rare shelters at the end of this day and I set up my tent underneath it. Next morning I had to realise that my clothes were inappropriate for that kind of weather -  I had to buy some more stuff or I would suffer from the cold. In the  next market town I entered a trendy fashion boutique and the poor sales girl must have thought she had an epiphany: I came in dripping with water, wearing a blue trashbag as a skirt and gesticualting around my head. But she quickly understood - and after five minutes I left the shop with this warm wool hat! 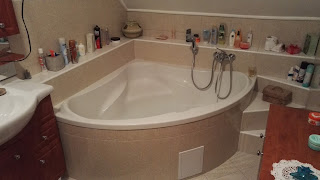 Zirc was my destination for a rest day: the town boasts a huge monastery. Although the monastery and especially its library was impressive I was more fascinated by its recent history. During the Communist regime the monks were deported to prison and the abbott even tortured. He spent the rest of his life in prison and never saw his monastery again. The buildings were uninhabitable when the monks returned in 1990 to restore the monastery. My personal highlight though was the holiday apartment I had rented for my short stay: it had three bedrooms, one kitchen, one dining room, one living room and a huge bathroom with this bath tub. Of course I did not need such a big place but nothing smaller was available - and the whole palace just cost me 25 EUR!

I now got closer and closer to Budapest - and the flat landscape became hillier and hillier. This picture is taken from Nagy-Gete at an altitude of 457 m.... the last 100 m were really much steeper than you would expect from such a flat country! From here I descended to the industrial town of Dorog and took the train to Budapest.
Eingestellt von German Tourist um 20:11