I absolutely loved cycling in Japan and I can highly recommend it to anyone. The only thing I do not understand is that cycling in Japan is not more popular: In the whole three months bike touring around Japan we only met one other group of Western cyclists and 2 Japanese long-distance cyclists - that was it! Therefore cycling in Japan is a well-kept secret...

But why did I like it so much? First of all Japan is about the safest country I have ever travelled in and that refers to crime as well to road safety. The murder rate in the US is ten times higher than in Japan! Crime and theft is not a problem in Japan. We happily left our fully loaded bikes outside supermarkets and museums and never had a problem. Safety also isn't an issue with free camping. And we were never overcharged in restaurants or shops - on the contrary: When you leave money for tipps in restaurants the waiter will come running after you to give you your money back!

I also felt very safe on the roads as Japanese drivers are probably some of the most polite in the whole world. Climbing up steep and winding mountain roads drivers would sometimes follow us at a snail's pace for 10  minutes because they could not safely pass us. There are no big trucks in Japan either. We encountered a tremendous amount of incredibly quiet back roads especially on the smaller islands of Kyushu and Shikoku with about one car every half hour! But you also have to deal with really heavy traffic on major roads especially on Honshu - but still: Although cycling in heavy traffic was not nice, but still felt safe in Japan.

You see a lot of cyclists in the big cities where cyclists are very well cared for with bike lanes and even bike parking. But Japanese use bicycles only in city transport - they do not go cycle touring. Still, no matter where you go you can usually use the sidewalks for cycling making it easier to avoid heavy traffic roads. 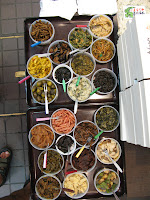 Japan has a reputation for being a very expensive country which we found not to be the case. Although Japan is definitely not a very cheap place to travel it is not more expensive than the US or Western Europe. Supermarkets are ubiquitouos and once you have figured out what to do with all that weird food stuff you can just cook your own meals. Just eat what the Japanese are eating like rice, fish, tofu etc and it will be cheap. But if you want to eat what you are used to like bread, dairy products, chocolate etc than you will pay dearly. Free camping is easy and using business motels in the big cities you will not have to spend a lot on accommodation either. Sometimes you will only be charged a reduced admission fee as a foreigner!

Japanese people are incredibly friendly and you will often be given food and even accommodation. If you are lost or need any help Japanese will not let you go until your problem is solved. But keep in mind that Japanese are very reluctant to speak English. A few words of Japanes will get you a long way!

The biggest attraction in Japan though is that there is so much to see and almost everything is new and exciting. There are tons of museums and sights, interesting nature stuff like volcanoes and beaches and of course lots of every day Japanes stuff that is just so exotic and interesting to us like the hot spring baths and just plain restaurants. I realised from the amount of photos John and I were taking how fascinating everything was in Japan.

We spent 3 full months in Japan and would have stayed longer had our visa not ran out. I was very sad to leave Japan and I am very sure that I will come back.
Eingestellt von German Tourist um 00:43