The most obvious sightseeing spots in Japan are the ubiquitous temples, castles and museums, but after a while you can get really fed up with all these temples and shrines and so I decided to throw in a couple of weird sightseeing spots as well.

The first (and most normal one) was Mikimoto Pearl Island. For those of you who did not know (and I did not know either): Cultured pearls where invented in Japan by a Mr. Mikimoto. He made a fortune out of it and part of it went into the construction of Mikomoto Pearl Island (which also serves very well for the promotion of pearl sales....). On this tiny island and its museum you will learn everything that you ever wanted to know about pearls but never dared to ask. In order to create a pearl an object has to be inserted into an oyster's gonad (I did not know they have gonads either) and this is a major operation only 60% of the oysters survive. Therefore they are well rested before the operation in an "stress-free environment", before they are placed into a sort of oyster gynacological chair, forced open and have this object inserted. To help them recover they are placed into "relaxation pools" before they are kept 2 more years in the ocean alternating between their summer and winter residence and then - they are harvested! You could also see female divers clad in some sort of white cotton dress from head to toe (including a bonnet) - and they dive in that thing! I was very much impressed by all that, but still not tempted to buy a pearl neclace.
Next was a visit to

a Toyota car factory. Ever since visiting to Audi car factory on my European bike trip more than a year ago I was fascinated with car factories, so I put a lot of effort into reserving a Toyota tour - all possible via internet! The Toyota car factory is located in a town called Toyota - and that is no coincidence. The guy who founded Toyota was called Toyada - but Toyota sounds better and is a luckier number in Chinese writing as well. As it was to be expected the ride into Toyota was a bit of a nightmare - lots and lots of traffic! 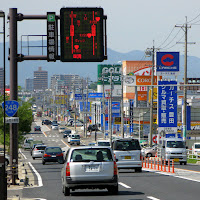 But the factory and museum tour was worth it! In the museum you could see the cars of the present (Toyota is especially strong on hybrid cars) and the future as well as all sorts of gadgets like a trumpet playing robot. And you see even more impressive robots in the factory: All welding is done by welding robots - quite an impressive sight, but unfortunately you are not allowed to take any pictures. After the welding and assembly lines we still did not have enough and continued on to the Toyota Memorial Hall, where Mr. Toyota's life is depicted: He overcame all problems, but stumbled over a workers' strike. Interesting how he built is first car: He just bought a Ford Modell T from the US, took it apart and copied it! I was for sure impressed and if I ever have to buy a car again I might consider a Toyata. 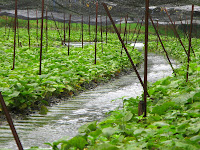 The weirdest sightseeing spot however was a horse radish farm. Yes, you read correctly. Everything is possible in Japan and so they turned a huge horseradish farm into a tourist attraction including free sampling and temple visiting. I must admit that I had no clue of how horseradish is grown and was very much surprised to see that is grows on small pebbles or very rocky ground constantly flooded by running water. I was even more surprised to see what you can make out of horseradish: The samples included even horseradish ice cream!
Eingestellt von German Tourist um 12:28