At the very end of my trip with less than 2 weeks left to cycle I ended up with bike trouble - and big time as well!

It all started quite innocently with my bike stand. John does not have a bike stand and had parked his bike leaning against a wall. My bike was parked in front of it. All of a sudden his bike with 40 kg of crap (sorry, valuable equipment) on it fell and crashed into my bike. Result: My bike stand broke off and John and me were yelling at each other.
Next the bottom bracket started making some very weird noises again. It has not come loose (yet), but going uphill it sounds worse than an old steam engine. And then the real trouble started: Slowly but gradually the gear shifter stopped working. First it was just hard going, then I could not reach the lower gears any more and in the end it would not move at all.
But things got even worse: When we took the back wheel off to investigate the gear shift problem we discovered that a tooth had broken off the back sprocket! That night I did not like cycling at all any more. All this cannot happen when you are hiking. When hiking gear breaks, I can usually sew it or tape it, but bike trouble is a little bit more complicated. I started contemplating finishing my trip on a train. We decided to cycle to the next bigger town and try to repair the whole affair. And we just made it there in time before the gear shifter become totally stuck.

Part of the problem was the lack of tools. In order to open the cable box on my fabulous Rohloff speedhub you need a star key. Of course any reasonable person would have tested every nut and bolt on her bike before setting of on a major trip to have the right tool, but I had never thought about it. And to make matters worse I did not even have a spare shifter cable. So there we were not being able to open the cable box because we did not have the right tool and even if we had had the right it would not do us any good because we did not have a spare part?
Luckily the first tool shop in Samcheok did have star keys! We opened the cable box and saw what we had expected. The shifter cable had frayed and become stuck. Luckily I had posted the problem on a German internet bike forum and received loads of very good replies from which I had learnt that you can use any thin shifter cable as replacement. Life seemed good: We had the right tool and a spare part. But then it happened: The screw that fixes the shifter cable in the cable box did not budge at all - and then the screw's head wore out, the tool did not get any grip and all seemed lost. I saw myself on a train again and did not sleep very well that night.
Next morning we did a Grand Tour of Samcheok's tool shops. I must say that some things are easier in less developed countries. The people in the tool shops really knew how to deal with the problem. The first guy just took a bigger Allen key than needed and filed it to the right size to get some grip - it worked but the screw would still not budge. We were sent to another tool shop where we eventually hit the jack pot. The owner knew his stuff and drilled the screw out. I expected that he would ruin the thread doing that but no - everything was fine. And when we found spare shifter cables and a M4 headless screw in a bike shop nothing could stop us any more. Two hours and two fucked up shifter cables (cut off too short) later the gear shift was working better than ever before. I was very proud of John, because he had done all the repair? 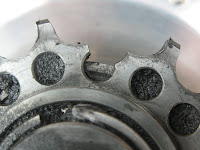 But when we tried to fix the sprocket problem we were in for a bad surprise. We thought that you can use just any replacement sprocket - and that was very wrong! The sprocket was a special Rohloff part and of course not available in Korea. Even the only shop in whole Korea that deals with Rohloff does not have it. I could still ride the bike with the broken off tooth but should we risk it? I decided to do some internet research and the same German bike forum came to my rescue. I discovered an old thread discussing this exact problem and including an answer from Mr. Rohloff himself. Content: Teeth do not break out of Rohloff sprockets and if they do it is a quality problem and Rohloff will send out a spare part to wherever you are. I emailed Rohloff immediately and got an answer within 2 hours. This is what I call German efficiency. The answer was even better: Continue with the broken sprocket (it will not deteriorate) and we will replace it once you are back in Germany.
So now I will continue cycling with a functioning gear shift, no bike stand, a broken sprocket and a bottom bracket that squeaks like hell. Wish me luck for the rest of my trip!
Eingestellt von German Tourist um 15:20