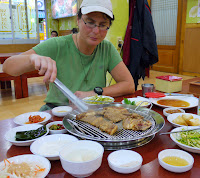 I liked Japan so much that South Korea will have a very difficult position.... but after 3 days in Korea I can already say that it is not bad.
First of all it is much cheaper than Japan. It is not dirt cheap, but very affordable. And so we are eating out twice a day, something that will bust your budget in Japan. 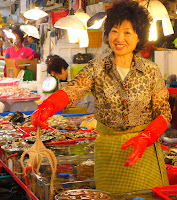 And that brings me to the second topic - my most favourite one: food! Japanese food was very elaborate and sophisticated and tasted mostly of - nothing! Korean food is not very elaborate, but very spicy and hot - and cheap!!!! My favourite is Bibimbap, rice with all sorts of vegies and a fried egg on top - you mesh it all up before you eat it. Looks pretty yuk, but tastes very nice. Today we had our first on-the-table-barbecue. You sit on the floor with a very low table with a hole in the middle in front of you. The waiter then places a bucket with glowing coal into the hole and puts a grill on top - ready is your barbecue. Everything comes with a huge variety of very tasty side dishes, foremost the favourite kimchi, but also pickled radishes, chilis, seaweed and the like. Very delicious and very cheap! We still have to try seafood, but we have already been to a very exotic seafood market, where you can eat fish I did not even they existed before.

Thirdly, Koreans are much more outgoing than Japanese. We are constantly asked where we are from and everybody wishes us a nice stay in Korea. Strangely enough more Koreans seem to speak more English than the Japanese.

The downside is that now is holiday season in Korea and we could see that here on the beach were you could hardly move any more. Koreans were stockpiled like sardins in a tin.
Also Korean drivers are by far not as polite as the Japanese. We have not yet cycled here, but I have already seen a lot of drivers jumping red traffic lights - impossible in Japan!
Eingestellt von German Tourist um 14:07