After having met 2 really nice and helpful Mormons (John, my fellow AZT hiker and the ladies who rescued me after my bike break-down) I was now really curious to learn everything about the Mormons.
I moved to my next couchsurfing host Sue (who has been a Mormon decades ago) and spent the next whole 3 days on Temple Square (which is the Mormon equivalent to Vatican City in Salt Lake City). There was a lot to do! But for all of you who are afraid (or might hope for): I did not convert to Mormonism! 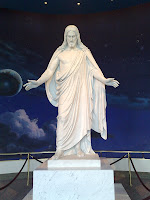 Attractions and tours: There really is a lot to see. First of all there is the Tabernacle (the old Mormon meeting hall) where you can hear an organ concert. Then there is the new conference center that can host 21,000 people and offers a free organ recital as well. (It was kind of weird to hear the organ concert with just 5 other people in such a huge auditorium - and probably frustrating for the organist.) There is the Mormon Museum and the Beehive House (where the Mormon leader Brigham Young lived with several of his wives). I visited the Geneology Research Center (with free internet, hurray!) and took a tour of the gardens. But most impressive was my tour to the Humanitarian Society and the Welfare Square - both Mormon relief organizations. And as a former efficiency expert I was really impressed to see how well organized all these organizations were and how smoothly the tours were run. I did not know that the Mormons have special farms that only grow food for these humanitarian organizations. And what a coincidence: Back when I was hiking the Florida Trail, there was a huge road walk around Deseret Ranch - which is one of these Mormon farms! By the way: The Temple is like all Mormon Temples only open to Mormons with recommendation from their bishop.

Movies: I was surprised about the amount of movies you could see - for free of course (all attractions, tours and movies are free at Temple Square). And no expense was saved making those movies. I saw one about the life of Joseph Smith and one about the Mormons exodus to Utah (called "Legacy"). And there were documentary movies at the humanitarian center. It surprised me to see that there were boxes with tissues on every row - I mean, this is not a porn theatre! But after the movies almost everybody is sobbing with tears (including me!) and then it dawned on me what the tissues are for! The movies are made very touching and emotional, although a bit tacky... 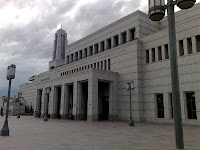 Missionaries: I guess we have all seen them before: Well-dressed, polite Mormon missionaries, always in pairs. Usually it is two young men, but on Temple Square there are only young women wearing ballerina shoes, skirts way below the knees and blouses with sleeves. They all carry the Book of Mormon with them - always. And they tried to answer all my questions - and I had a lot from birth control (yes, allowed) over divorce (difficult, but possibly) to homosexuality (not allowed to practice). They come from all over the world (I had tour guides from Switzerland, Scotland, Tonga and Paraguay), are incredibly friendly (my guidebooks says they can "nice you out") and to my big surprise they have to pay to become a missionary: 400 US$ per month for everyone, no matter what country they are working in - the Church levels it out among all missionaries. They cannot chose which country they are sent to - the Church assigns that and prepares them with intensive language courses. The Mormon religion is the fastest growing religion in the World: Right now the Church has more than 11 million members - no wonder with all that missionaries.

It was a fantastic coincidence that only a couple of days later I found Jon Krakauer's book about Mormons and their fundamentalist split-off sects ("Under the banner of heaven") in the used book section of a library. It was so interesting to compare what I had seen and heard on Temple Square with the historic background in the book. Polygamy is not mentioned with a single word in the monuments and museums on Temple Square, although is was practised by Mormons until 1890 and was the major reason for their prosecution. I had asked a missionary about polygamy and he explained to me that back then all the widows had to be looked after economically..... Krakauer states that most of the multiple wives were teenagers when married - go figure yourself.

Another interesting fact is that Joseph Smith, the Churches founder, had been running for the American presidency and that the Mormons had quite a strong militia - after being prosecuted and forced into exodus various times. That explains why Mormons are allowed to serve military service.

Bottom line for me: I found the Mormon religion extremely fascinating and colorful and the Mormons I have met were all incredibly friendly and helpful! And I learnt a lot - about the good AND the bad....and the discrepancies in the self-presentation of the Mormons and the historical background.
Eingestellt von German Tourist um 08:03