Slovakia offered some real landscape highlights! It started already in the tiny mountain range of Súľovské vrchy or Sulower Berge in German where one view point came after the other - unfortunately linked by some steep trail! 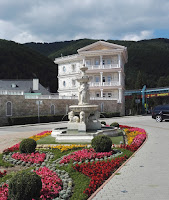 Descending some more very steep trail I arrived in Rajece Teplice, a posh and tacky spa town. The spa complex is called Aphrodite and seems to be a Slovak version of Las Vegas! I arrived just before the local supermarket closed and sat down at the town square watching tourists who seemed to come from all over the world - even including some Muslim women with head scarves - a rare sight in this part of the world. I would have liked to stay one night and relax in the thermal pools but now in high season everything was booked solid - and would have been expensive anyways. 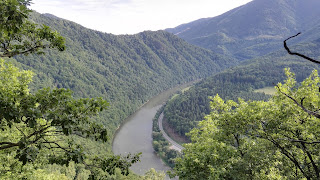 In Strecno I wanted to go shopping again because I was completely out of food and nearly got a heart attack when a billboard sign said that the supermarket had already closed for the afternoon ... Luckily the billboard was outdated and the supermarket still open! Strecno even had a small visitor centre where I could hang out in the shade but had to pay for the toilet - which I also needed in order to get water. What followed was a long and very steep ascent out of the valley of the river Waag with spectacular views and a problematic search for a campsite. On top of the mountain ridge there were plenty of scenic spots but all were in plain view from the trail where even shortly before sunset several hikers were still on their way to the next hut! But I was lucky and found a flat spot on an otherwise steep slope.

Next day brought some of the most spectacular hiking of the entire trip: I was traversing the Mala Fatra, a National Park. The entire day I was walking on top of the crest, mostly even on knife-edge - although the trail was really easy due to the amount of tourists! In the evening I had to rush to get out of the National Park for wild camping but other hikers did not seem to bother: Even briefly before sunset a bunch of Slovak hikers entered the park and it was apparent they were about to free camp, too! 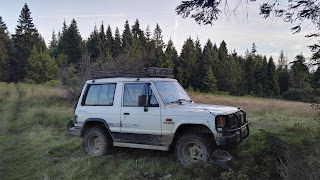 A couple of nights later I was in for a big surprise with wild camping. Again I was hiking along the broad crest but could not find a hidden campsite because the whole ground was overgrown with blueberry bushes. I settled for a place underneath a tree right next to the track and figured that late at night or early in the morning no one would come along. I was completely wrong. At five in the morning a jeep came rumbling along the crest and stopped only one hundred metres away from me. Several people jumped out - and I was suddenly scared by a loud explosion. People came running along the trail and soon I was discovered. And then another explosion! 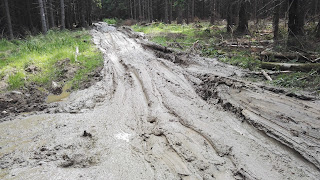 It took me a while to realise what was going on. This was a gang of blueberry pickers (legal or illegal) and they had fired a rocket to scare away any wild animals! I quickly packed up and had a very early start this morning. I had just walked a couple of hundred metres when the next surprise was waiting for me: an adder was lying right in the middle of the trail sunning itself. I quickly passed. My quick pace was stopped pretty soon by this mud desaster on the trail. Farmers were cutting down trees and their vehicles had turned the trail into a mud bath. They had to work with horses to get the downed trees out of the forest because the ground was destroyed so much. 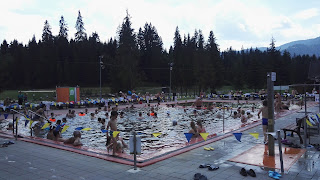 Right at the border with Poland Slovakia had a nice surprise for me: the thermal bath of Oravice right on trail. Although it was almost 30 Celsius in the sun I enjoyed the hot water - at least as long as the sun was hidden behind the clouds ... This was holiday time and the pool was chock full with people which I found quite entertaining - although I was quite jealous of those bathers with an umbrella. I had not had that much foresight!