My first day out of Kotel ended quite exciting! I was hiking on the crest again and had not seen a single soul for hours. I therefore decided that I could dare to camp close to the trail - and when I was just test lying the camp site a jeep approached! I just stayed where I was on the ground and thought that the driver had probably not seen me. I had just finishing setting up my tent when the same car came back and stopped close to my tent! It was already dusk and again I was not discovered. A lot of door banging and chattting but then the car left. I thought that now I was finally left in peace but I was wrong! 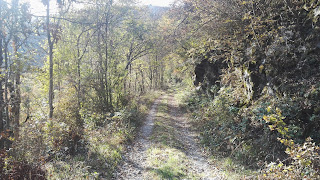 At 10 pm an ATV approached, illuminated my tent and stopped right in front of it - and I froze inside! Two guys were trying to lure me out by yelling hello for several minutes. I decided to just not react at all. As it was already bed time I was only wearing my underwear which would have not made a good impression ... After a long debate the guys finally left - apparently they were as much afraid of me as I was of them. As soon as they were gone I packed up as quickly as I could because I was expecting them to come back. I then ran up an overgrown path where ATV's could not pass, hiked another quarter of an hour and set up my tent in thick forest - hundred metres away from the trail. And finally no more disturbances at night!

Next day the trail was so overgrown that I was much slower than expected - and ended up camping directly on the trail which was a very old road. I was not afraid of car traffic there but animals use these roads, too and the forests were full of wild pigs. Still the night remained quiet. In case of an injury trail planners have provided these wooden "pharmacies" along the trail. On the roof there even was a solar panel and a USB port for charging your phone! I have never ever seen anything similar along any other trail!

Eventually I now met Frantisek, a Czech thruhiker on his way from his hometown in Czech Republic to Istanbul! Frantisek had found out about me on Facebook and we had been messaging back and forth to set up a meeting. He had always been in front of me but was now waiting for me at a forest shelter for me to catch up. Frantisek had left for this hike two days after he had officially retired from his job at a bank - that is what I call determination. We have had a different route though - Frantisek had gone the longer way all through the Carpathian mountains and Ukraine! 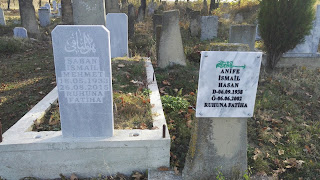 We walked and camped together for a day and it was such a joy to have company again, especially since Frantisek spoke perfect German due to his former job. At his stage we came through several Muslim villages. These people are descendants of the former Turkish rulers during the Osman Empire and there is a 10% minority of these "Turks" in Bulgaria. I saw mosques in villages and several Muslim cemeteries like this. 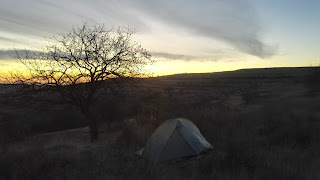 I was hiking a bit faster than Frantisek and therefore we split up again after one day. My second last campsite on this trip was in the middle of endless open pastures. I was afraid of early "visitors" and therefore got up before sunrise on my last day - getting this wonderful picture. Kom Emine is still following the crest here - but the crest is very, very low now and soon I caught the first glimpses of the Black Sea coast ...

On October 21st I finally reached the end of my hike at Cape Emine. There is an decrepit military base right at the cape which is off limits for hikers but right next to it you can descend to the rocky beach. It was a glorious sunny day - perfect for finishing such a great hike! But now I had to get back into civilisation - and this turned out to be far more difficult than expected. I walked down to Elenite, a posh resort town at the seaside and expected an easy hitchhike to Nessebar. But to my utter surprise the place was virtually deserted - no traffic whatsoever! I ended up walking several kilometres along the coastal road where endless now holiday complexes and resorts where now being built. But beside construction lorries no traffic whatsoever!

Lucikily I encountered a young Bulgarian couple on an off season holiday trip - and they called a taxi for me that brought me to Nessebar where I spent a last day relaxing. On my last evening in Bulgaria I had a surprise visitor: Frantisek had caught up to me and we met in a wonderful seafood restaurant for a farewell dinnner. I could not have imagined a better ending for this trip! After two bottles of wine I went back to my nice hotel - and Frantisek to his campsite in the dunes on the beach! Early next morning I took the bus back to Sofia and from there I flew back to Berlin - and German winter weather!
Eingestellt von German Tourist um 11:16