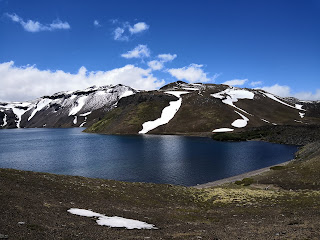 Next GPT section was the Villarica Traverse, another popular hike on a volcanic plateau. It started with a long, but easy ascent and when I had nearly reached the top, I sat down next to a water source and had lunch. While I was eating some weird sound came closer and closer. And then I realised with great honor that what I had thought of as chain saw noise from logging activities was in fact a group of motor cyclists! A whole group of them emerged out the forest and try to climb up to the top - although this was a national park! This last bit of ascent was so steep that they could hardly manage and I was faster on foot. I hiked as fast as I could to escape the noise and exhaust fumes but I could still here them driving up and down the slopes for hours. 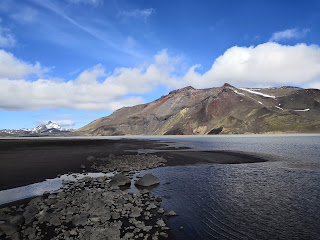 When I finally got out of hearing range I started to love this trail section. For the first time in Chile I saw trail markers, the going was relatively easy, no more snow fields - and an incredibly spectacular landscape where I was all alone from now on. When I finally descended and arrived at the park boundaries a sign said explicitly that motor cycles are not allowed in the park ....
Unfortunately cows did not care about park boundaries either and therefore I had some very curious early morning visitors. I left the park on New Year's Eve and made a mistake: instead of taking the last nice campsite in the mountains I decided to hike on because it seemed to early to camp ... I was now hiking on dirt roads which was easy and fast - but camping was difficult! First I was accompanied by a young Chilean guy on a bike. Then I treated myself to an ice cream in the small town of Currarehue. And then I could not find a campsite ... The terrain was either too steep or fenced in or both. It was already getting dark when I eventually found a suitable place near the road - and then the owner caught me. Luckily she was a very nice older lady and when I explained my problem she allowed me to camp on her property. I was very much relieved because I did not want to ask at people's houses that night. But New Year's Eve does not seem to be such a big deal here. There was a firework down in village but close to my campsite it was a quiet night after that. 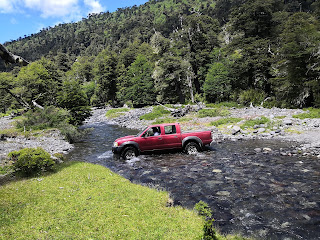 Next day the road walk more or less continued with hardly any traffic. Someone had even parked his horse near the road. This time I had more luck with camping. Right before sunset I found a wonderful hidden spot close to the river.
More road walking followed althoug "road" might not be the best term for the trail I was following through the National Reserve of Sollipulli. There were no bridges for the few vehicules I saw. The river crossing were very easy but I still got wet feet.
To spice things up a little bit there was a long section of bushbashing the next day. Although the trail was terribly overgrown and I was down to 2 km/h a horse rider most have been through here recently.

More road walking to the town of Icalma where I could buy more food and had problems again with finding a campsite in this populated area. But the morning bath in the Laguna Icalma was great!!! 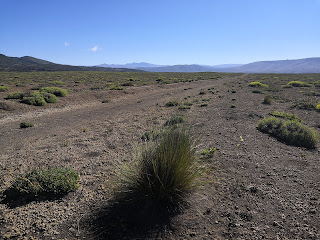 This long stretch ended with an abrupt change of scenery. So far I had been fighting my way through Valdivian rainforest or bamboo junge - and now I was hiking in near desert conditions. The land was so dry and dusty that there wasn't even any cattle on this plateau. I reached the border town of Liucara on a Sunday afternoon worrying about the bus schedule back to civilisation. But my timing was perfect: I could change into me cleanest clothes in a public toilet, have lunch in a restaurant and then boarded the bus to Temuco. I really deserved two rest days now after this long stretch on the GPT.