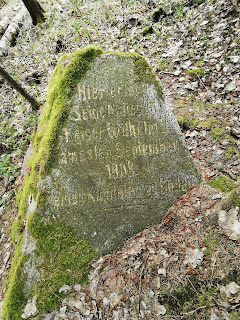 The Pusza Romincka (Rominter Heide) is a huge forest, now partly in the Russian enclave of Kaliningrad and partly in Poland. The border is only marked by a couple of boundary stones - and I stayed clear of it! German emperor Wilhelm II used to hunt here - as did Hermann Göring. I found this withered memorial in the middle of a swampy forest, the inscription says that His Majesty Emporer Wilhelm II shot a buck here in 1908.

When I reached my prebooked room in a agroturystyka that evening a landrover stopped by me and a camouflage clad guy waved me over. I took him for the landlord but soon discovered that this was Polish border patrol! "Documentation!" I was asked and his female partner tried to check my ID while I was explaining in English what I was doing here. They did not believe me it seemed but still let me go. At least they did not take me for a an alcohol or cigarette smuggler. My room in the agroturystyka cost my just 15 Euro but could have been a 4 star hotel. Needless to say I was the only guest. 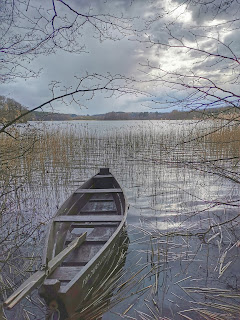 It was still snowing every day now end of April and I ditched camping. Accommodation was plentiful and cheap, mainly because of the Green Velo, a popular bike route through Eastern Poland.
I passed the former monastery of Wigry, founded by the Camaldoli order - a place in Italy that I had visited just the year before. Now hotel guests live in the fomer hermit's cells.
I discovered former Russian Orthodox churches and a Jewish cemetery - this area has housed so many now forgotten people and cultures.
I was very lucky with my second last accommodation. The landlady, eight month pregnant, spoke fluent English because she had worked in the UK before. When I left after a hearty breakfast, Joana gave me her private cell phone number - just in case. She must have had foresight!
When I reached my final destination at the Lithuanian border, the pilgrimage town of Sejny the famous church was already closed. I had made a reservation at the only hotel in town via booking.com, but when I arrived the place was all locked up. 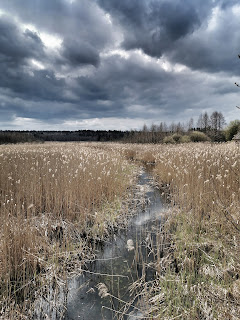 I called the phone number on the confirmation but whoever answered the phone only spoke Polish - and just hung up on me. When I tried to call again - no one picked up the phone. Why bother with an ignorant tourist! Never ever such a thing had happened to me before. When I reported this incident to booking.com after my trip, I was not even offered an excuse or given any compensation! My review was not published on their website. I have used booking.com for over a hundred of bookings - and am deeply disappointed now. They take your money - but don't help you when there is a problem. "We are not responsible", was there only answer to my written complaint ...
But luckily I had Joana's phone number. When I told her about my problem, she jumped into her car, picked me up and even gave me dinner!
And now comes the sad ending of this hike ...
Due to Corona I was only allowed to cross into Lithuania with a negative test - and a seven day quarantine. Which is a long time for a country that I would traverse in 2,5 weeks. Plus the situation in all three Baltic countries was the same. I had decided to go back to Germany and do another hike in the meantime.
But Poland was now considered a high-risk country in Germany which meant I could only come back with a negative Corona test. And as it turned out that was difficult to obtain in Poland. PCR tests were easy to find but very expensive. Antigene tests were accepted in Germany but rarely available in Poland. The closest test center was in Bialystok - and Joana was going there to have a check up of her pregnancy. She and her Bulgarian husband took me directly to the test center and even inquired for me if they offered the right test. I still had to wait 2,5 hours in the cold before it was my turn. I have never seen so much inefficiency as in the test center ... After a short sightseeing tour through Bialystok I took the train back to Berlin where I also had to go into quarantine - but only for five days which are tolerable when you have Wifi and a laptop to work with. I hope to be able to continue towards Finland later this summer!
Eingestellt von German Tourist um 21:16