Like one year ago I took the train to Görlitz - only that it snowed this time! I went to the exact same spot where I had started my hike to Italy on May 31st, 2020. Back then the sun was shining and I wore a T-shirt. On March 17th, 2021 it was bitterly cold and raining - I even had to wear a jacket. But one year ago the border was closed whereas this time I could cross without any problems. I did not even need a Corona test (althoug I had taken one just in case!). Just four hours into my hike I got a disastrous message on my smartphone. Four days from now Poland would go into a hard lockdown because infection numbers were rising exponentially. This news hit me hard: I had chosen Poland because hotels and museums were open - and now everything would close down! Normally this would not affect me that much because I am camping anyways and do not depend much on hotels. But the weather forecast was a nightmare with temperatures well below freezing for the next few days. I had prebooked hotels for the first few days but would they accept me now in lockdown? Tourist travel was forbidden now but as a writer I was travelling on business. The first night I stayed in a hotel in Luban which would close for lockdown. Would I even be able to find accommodation that was open?
I decided to hike on. Lower Silesia was once German so every town had an old German name. I discovered that there are two "Naumburgs" and walked through Bunzlau (Bolesławiec) at night where I stayed in a quite luxurious "room for workers". The quantity of the breakfast there was really meant for workers and saved me eating lunch! 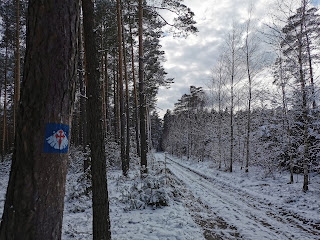 The next days let me walk through various snow storms, temperatures dropped down to -6 C. In Polkowice I stayed in a hotel on the first day of lockdown. They confirmed my booking only one day before because it was still unclear who was allowed to use hotels. My publishing house had sent me a document stating that I am travelling on business which was luckily accepted wheras another hotel cancelled my booking claiming that foreigners were not allowed. When I asked at the reception what the exact rules are the receptionist just shrugged her shoulders: "We do not really know ..."
The Lower Silesian Camino ends in Glogow (Glogau) where I crossed the river Oder on a bridge that was painted in bright pink! (No idea, why they chose this unusual color ...). The last days had been filled with snow storms and I had not met a single other hiker. In fact, my gpx track had even led me to a major construction site. Where the camino is supposed to be now a motorway is being built. I had trouble crossing it ... I had booked myself into a holiday apartment in Glogow where I even stayed two days to do the next section as a day trip by train - because no other accommodation was availabe and the weather continued to be a nightmare.
Eingestellt von German Tourist um 10:41