In Belgium I encountered several unexpected obstacles - one of them was closures because of hunting. When I was arriving at my camping forest one evening there was a big sign in French announcing hunts - and saying that you should not walk through the forest in the early morning and late evening because of hunting activities. What should I do? I had no choice (and no other accommodation) and therefore I continued on whistling and singing loudly. I hoped that any hunter would this way hear me before seeing and shooting me ... My strategy worked and I set up camp at a sight that could easily be seen by hunters. Luckily I did not see a soul and only heard shooting in a far distance.

Next day was my lucky day: When I was just dragging myself along in the heat being hungry and
thirsty I spotted a van in a litte village. It turned out to be the local baker on a sales tour. Two expensive but delicious chocolate croissants quickly disappeared into my belly before I continued to the two famous Belgian monasteries Maradret and Maredsou, know for their beer (which I don't drink) and cheese (which was nice).
Dinant was my next resupply stop and it greeted me with a wonderful view down at the river valley at sunrise.

It was a short hiking day for me because I had two visitors waiting for me:Gayle and Mick are two British hikers and runners whom I had met in Britain several years ago. We had always been following each other and therefore they knew about my route through Belgium - which they were to cross on their way home. They had been touring around Germany for the summer in their mobile home called Bertie. As I was about the cross the motorway they were heading up on we agreed to meet at a commercial campground. There I could not only enjoy a hot shower but was also very well fed and entertained by my two friends before we both embarked on our respective ways the next morning.

The GR 129 had now finally reached the Ardennes with plenty of forest and the wonderful river Semois which winds its way through it. When I say an old railway line turned into hiking trail I decided to use this detour. It turned out to be very scenic - but with an huge obstacle. Right in the middle of nowhere the old railway led through tunnel which was completely fenced off - but someone had cut a small hole into the mesh fence. Could I dare to go through the tunnel without seeing any light on the other end? I took out my headlamp and risked it - and had no problem whatsoever! 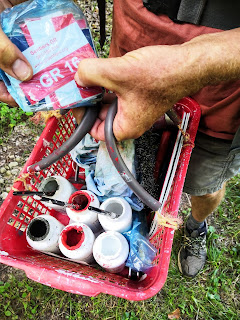 Orval is an active monastery also known for its beer. I had hoped to have a rest day there but unfortunately exactly that week the monks were gone for a retreat. Early morning I was the first visitor waiting to be let in. When I used the bathroom I had a look in the mirror and discovered a tick right on my eyelid! I took out my little Swiss army know and plucked it out with my tweezers - while a full busload of tourists watched my little operation. Back on the trail I met a guy from a Belgian hiking club who was doing trail maintenance and refreshing trail markers. It was very interesting to have a look at his tool box and chat with him. He continued on while I was finishing my lunch. To my big surprise he came towards me after half an hour: The trail ahead of us was closed due to African Swine Fever. And it was seriously closed with a stable metal fence around the whole area and locked gates. What to do now? There was no map of the affected area and also no detour. Even the neighbours had no clue how big the fenced off area was. They just warned us to go in there because inside they were hunting wild boars day and night. I decided to walk around which is difficult not knowing how big the area is ... 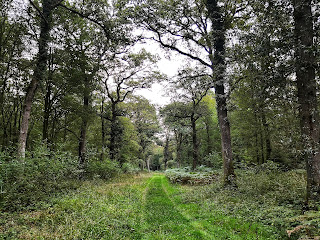 I ended up doing a huge detour. Every access trail into the forest was blocked and warning signs were everywhere. I started to worry about were to camp that night! When I reached the forest I had planned to camp in I saw another warning sign and almost despaired. Luckily I took a closer look and discovered that this area had been closed a couple of weeks ago and was now open again. Still, it was already dark when I eventually set up my tent ... The disease has not reached Germany yet and I do hope it stays that way! Also Luxemburg which I was entering now is still free of the disease.

Before embarking on this trip I had hiked in Belgium before and had very much enjoyed it. The GR 129 was a bit disappointing in comparison. The part through Flanders was downright boring. Lots of road walks, difficult camping and just flat land with no particularly exciting views. I have had worse connecting sections on my various hikes but it wasn't a highlight either. Things got better in the South and at least wild camping ceased to be problem. I enjoyed the cultural sights and hiking was better but this was still no highlight I would recommend. There are better trails in Belgium than the GR 129. Still it was fascinating to cross an entire country and see the changes.