My trip started on July 3rd with several logistical complications. In Ireland I was following the European long-distance trail E8 which starts on Dursey Island in the Southwestern part of the country. But unfortunately, there is no public transportation going there! Getting there took me several days ... I flew into tiny Kerry airport with a direct flight from Berlin. Despite several low cost flights going there shuttle services to and from the airport are almost non-existent. I had pre-booked a taxi into nearby Killarney and was shocked to realize that I could hardly understand the taxi driver! Irish people do not speak the kind of English I was taught at school ... Killarney turned out to be a big tourist trap. Every other house was a B&B or restaurant. Luckily there were several outdoor stores, too where I could be a gas canister before embarking onto a bizarre bus ride to Castletownberee, the closest town to Dursey Island.

I had brought such a bad cough from Germany that the bus driver asked me if everything was ok with me ... I was more worried about the narrow and winding road that led to several emergency brakings. I was very happy to get off the bus and start hiking 20 km to Dursey Island! The real adventure was still to come because the island is connected with the mainland with Ireland's only cable-car, a construction that was built in 1969 and has a capacity of 6 passengers, 6 sheep or one cow. Cattle has priority over foot passengers ... The gondola is just fixed to one steel cable and crosses 350 meters over open sea. To calm down the passengers there is a bottle with Holy Water, a psalm and an intercom. 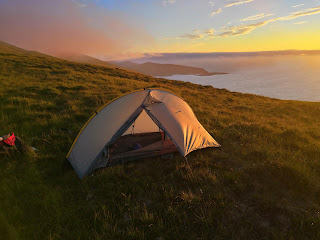 Once on the island I hurried to Dursey Head and the official start of my hike. I had even brought a
GoPro camera to record this moment. But when I tried to get it working the SD card was broken. I cursed modern technology and took some crappy pictures with my smartphone. Then I had to run back immediately to get the last ferry back. And this is when I first met Andrea and Mike who were also hiking across Ireland and had come by taxi .. We exchanged phone numbers and I hurried on. Being the only passenger in the tiny cabin was a bit scary. I had just caught the last ride. After all this rushing around I was rewarded with a wonderful sunset and a fabulous view over the sea from my campsite - although I was covered in fog the next morning in this exposed place. 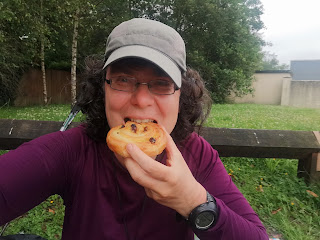 I was now hiking the Beara Way, in hindsight the nicest part of my hike through Ireland. The sea was almost always in view but I was constantly crossing fences on stiles and had to worry about cows in fields though no bull attack happened. Still, I was a bit worried about getting bothered by aggressive or just curious cattle that I ended up camping in the ditch between two meadows one night - protected from visitors by barbed wire fences on both sides. Not the most comfortable campsite and I only chose it because the forecast had predicted a dry night - elsewise I would have been flooded! Next morning I rewarded myself with a hearty breakfast on a Lidl parking lot.

After only four days of hiking I took my first zero day in Cork. Not that I needed a zero day that early in my hike but my birthday was coming up and I wanted to celebrate it showered with clean clothes in a soft bed. Therefore I had booked myself into an AirB&B whose owner was a former bank executive and excelled in AirB&B as a second career now. She loved cleaning as I could see in the sparkling clean house where I was served wine and cake as a birthday gift. Cork itself was a bit disappointing but I loved the Butter Museum where I learnt everything about Ireland's famous export product (besides whiskey). I think they put double the amount of butter in Lidl chocolate croissants in Ireland than in Germany. I became addicted to Irish pastry!