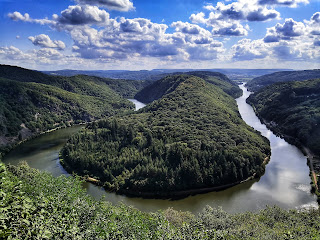 My trip through Germany started at Perl where I had already passed through on my previous European traverse. But this time all the supermarkets were closed ... Next morning brought me to the famous Saar Bow, a 180 degree turn in the river - a spectacular view and therefore incredibly crowded with tourists. But as soon as I hiked on I was almost alone again in the forest - at least until arriving in Mettlach with the famous porcelain factory of Villeroy & Boch. I could not resist and visited the museum and showroom. Being an ultralight hiker I was at least not tempted to buy anything ... 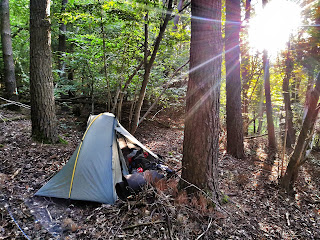 Camping turned into a bit of a problem that night
because the only small forest was located on a hill too steep for camping. And right on top were there was supposed to be a look out tower according to my map there was now cell phone tower with fences around the whole area. Luckily I found a flat spot right before sunset which was fairly quiet - until I realised that I was camped just a couple of hundred metres away from the church tower with the clock striking every quarter hour until 10 pm. And of course I was woken up in the morning with church bells as well. But the day took a very nice turn because my next rest day was coming up and I had been invited to stay with a fan of my books in Dillingen. 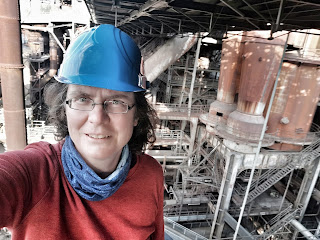 Getting there took me to Litermont mountain with a wonderful view. I could even see the smoke stacks of the steel works in the distance. Dillingen was not directly on my route and therefore I took the bus to get to my host. As she was working in the afternoon I used the spare time to visit an old steel work in Völklingen which had been turned into a UNESCO world heritage site. The area was huge and I could have spent an entire day there taking pictures, learning about steel making and seeing all the art and photography exhibitions. My host even picked me up by car. I did not see much of Dillingen because I was so happy to just lie in bed the entire day and use the internet! 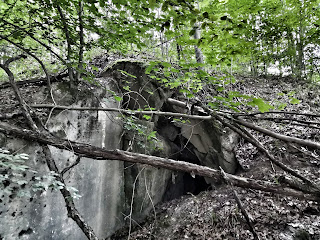 Hiking on I realised that this was not exactly the most scenic part of Saarland. The trail was ok but I was always close to civilisation and continously trying to find a campsite that was out of earshot of the various motorways. One evening I was so happy to find a spot out of sight that it took my a while to figure out that I was trying to camp on top of an old bunker! It was impossible to get my tent pegs in because underneath a very thin layer of earth I hit concrete. It felt a bit bizarre to camp so close to a WW II site but I had no other choice - and I slept well.The Saar-Mosel-Weg even took me right through a university campus where I used the change to charge up my cell phone.

I must say that Saarland was a bit of a disappointment although I had probably just chosen the wrong trail that led my through a very populated area.
Eingestellt von German Tourist um 03:29