Luxembourg is kind of a hikers' paradise with wonderful trail - but unfortunately these are all in the North of this small country. My route was leading me through the heavily industrialized South. Up to only decades ago mining was predominant in this area which was documented by a memorial for all the miners that had lost their lives in work accidents. It was interesting to see that the number of accidents significantly decreased over the years! Right nex to this impressive memorial is a much smaller one, a little chapel with the Madonna of Leiffrächen - a very popular pilgrimage site not only for miners. 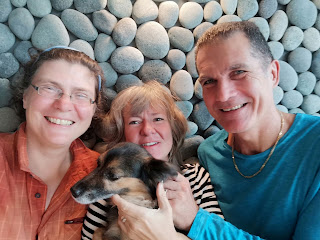 I was very lucky to have an invitation in Kayl
where one of my FB friends had invited me to her house. I was not only heavenly fed but could eventually ask all my questions about multilingual Luxembourg: The little country has its own language which is kind of similar to German so that I could halfway understand what is going on. When I tried some newlearnt words on my hosts' dog it even obeyed! And most people here also speak German as a second language plus French as the third official language! Very impressive also the incredible apricot cake I was served for dessert. I liked it so much that I was given the leftovers when I departed next morning! 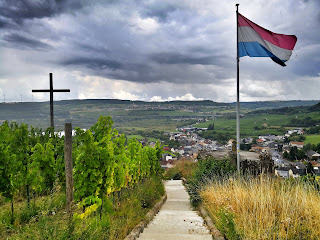 The rest of my route through Luxembourg was unremarkable. Nothing to write home about, but it was still amazing that  the trail planners found some relatively unspoilt areas where to route the trail through. Sometimes the scenery was really pretty but I could always here a motorway or trainline. Scenic highlight was my arrival at the three country border at Schengen / Perl where I hiked through the vineyards of the river Mosel and couldn not resist to nick some grapes.
Eingestellt von German Tourist um 13:27