Germany to Italy: Faenza to Norcia

The bus ride back to the trail was like a roller coaster. The driver even had to back up several hundred meters because the road was so narrow and oncoming traffic could not pass. Although it was a lot cooler and breezier up in the mountains than in town water became an issue. The next I hiked a 2 kilometer detour to reach a water trough only to find it bone dry. With my tongue hanging out I barely made it to the next pass where a ristorante provided a water tap in the garden. It was meant for dogs but worked for hikers as well. I downed one liter in 30 seconds ...

But it got a lot cooler and very foggy the next night. I was now hiking in Foresti Cansentinesi, high up on the ridge and all of a sudden I felt more like German Black Forest in fall than Italy in summer. I had been in this area just months before on the Way of St. Francis so this time I hiked a slightly different route. Badia Prataglia, which had been deserted in February, was now bustling with tourists.

When I checked my maps during lunch break in the main plaza I discovered a spa town close to my route: Bagno Romana! When I could even score I cheap hotel room in town I decided that spending the evening in hot thermal water is a great idea!
Other than in Germany Italian spas usually belong to a hotel or resort and are relatively small. Not all admit non-hotel guests, but in Bagno Romagna there were even three! It was wonderful to soak in the warm water and stroll through town in the evening.
Next evening I camped above a forest road well hidden in the trees, but was woken up by loud snorting. Was a cow or a horse visiting me? When I peeked out of my tent I nearly bursted out laughing: A rather overweight jogger was passing my campsite on the forest road.
I was now on the E1 that is paralleling a variant of the Way of St. Francis. I did not see many other hikers, but half a dozen of lost socks - no kidding. People strap them onto their backpack for drying and then loose them. 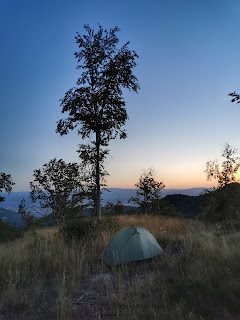 Two days later the forecast was so bad that I decided on a huge detour to Pietralunga, which I had already visited on the Way of St. Francis. All other accommodation was fully booked and even the place in Pietralunga was more expensive than I wanted. It turned out to be worth it! Because the town is on the Way of St. Francis I met a German pilgrim in the hotel and we had dinner together. Check out time was 11 am next morning but when having breakfast and watching the rain outside the hotel owner told me that due to a cancellation I could stay in my room until the afternoon. He even brought me pasta for lunch from his own family meal! It was still drizzling when I left in the early evening.
When I hiked back to the E1/Sentiero Italia on back roads and forest roads I got water from an outside tap near a house. Unfortunately a kitten took a liking in me and followed me playfully chasing flies and mosquitoes. I was worried if this tiny creature would find his way back home alone - and walked all the way back with it. I knocked on the door where it had started following me. I don't know what the owners thought of me but they took the kitten in again. 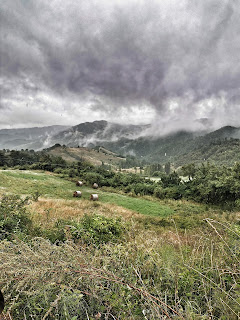 It rained so hard the next day that my fingers were pruned just from holding my trekking poles! I found a great shelter next to a lonely church during lunch where I could even charge my phone but after that all luck left me. Because the weather was so miserable I wanted to book a hotel in Scheggia - but all my email inquiries were answered negative: everything was fully booked! To make things worse the sun was already going down and the route traversed a steep slope where finding a campsite was impossible. The more I climbed the scenery looked rather like Scotland than Italy in the fog. The full moon made it even eerier! When I discovered a shelter on the map a couple of kilometers away I deceided to give it a try. Very close to the shelter I checked my GPS - when I felt something cold and wet touching my legs from behind. I turned around and screamed like hell when I saw a huge white dog!
All of sudden a light went on nearby and I realized what had happened: This was not the Hound of Baskerville, but a sheepdog and the shelter was not a public rifugio but the shepherd's hut. 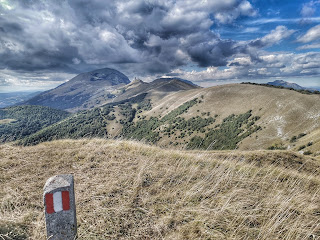 He came out of his hut wondering what the heck a hysterical German got to do here in the middle of the night. Of course he only spoke Italian but I understood as much that he offered me a place on the floor of his hut - between lots of empty wine bottles. When I politely declined and wanted to hike on, he insisted: "Lupi, lupi - wolves, wolves".
But other than chain smoking shepherds wolves don't snore, so I continued and pitched my tent a couple of hundred meters away. As soon as I had retired into my sleeping bag a car passed by at midnight! I don't know whether the driver even saw me or just couldn't be bothered to stops. After that no more visitors or wolves ... 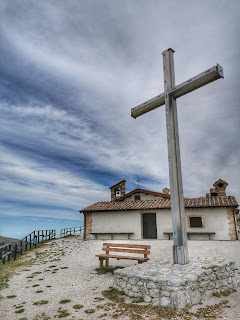 It took me a while to dry everything out next morning and unfortunately my couscous bag had leaked. I ate a bit that day but had to throw away most of it later because it started moulding ...
After more water problems next highlight was the Eremo Serra Santa which offers an panoramic view over the valley. The little church is closed but the entrance area is now officially a trail shelter complete with a wood stove and benches. I just cooked my dinner inside here on my camp stove out of the wind.
I was now hiking in the Monti Sibilini which are bald mountains with lots of free range cows and horses - and surprisingly many working water troughs. But this time I was lacking something else: My powerbank was almost empty! I had just finished lunch when two mountain bikers approached and asked me in broken Italian about the E1. They turned out to be from Germany and offered me their own powerbank to recharge my phone while they were taking a break. I hiked on and returned their powerbank to them when they passed me an hour later. 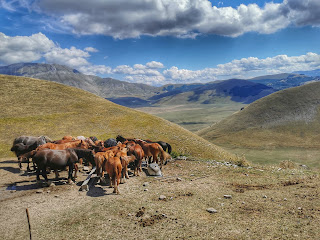 Visso was the first town on my route that had been destroyed by earthquakes four years ago. It still looked like one big construction site. The entire old town was fenced off as a danger zone.
When I continued the next day to Norcia I used old gpx tracks which led me right through villages that were completely abandoned. In some places I had to crawl over rubble and could still see the broken furniture. The most touching scene was a house were the front had collapsed and I could look directly into the former bedroom: The bed was still intact and looked like the inhabitants had just left for the day .... 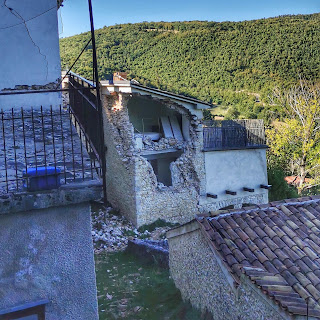 I think the CAI has changed the route of the trail by now but it was very touching to hike through these ghost towns ... Sometimes I was a bit worried that a ruin could collapse on me, some houses were just held upright by makeshift wooden planks!
In Norcia I was the only passenger on the bus to Spoleto where I had booked myself into an old monastery. I had been here in February but had not done much sightseeing.
Spoleto is a very tourist-friendly town: Because it is built on a steep hillside there are escalators taking you up and down - for free!!! Only two nearos here ...
Eingestellt von German Tourist um 16:31