Germany to Italy: L'Aquila to Sora 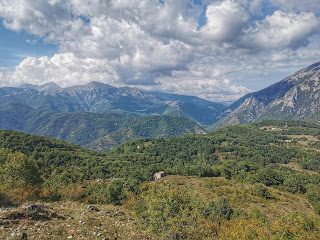 I took the "antique" train back to Antrodoco where the trail soon took me to a private property with "No entry"-signs - and several aggressively barking dogs. Right behind the fence was another trail marker so I was quite sure this is were I was supposed to go. Unfortunately the dogs thought otherwise. I used the old trick of picking up a rock which kind of worked here as well. The dogs kept a distance while I sneaked across grazing cows and climbed up the mountains. The dogs were too lazy to follow me uphill. The photo shows the view back down to the farm property that I had just crossed. 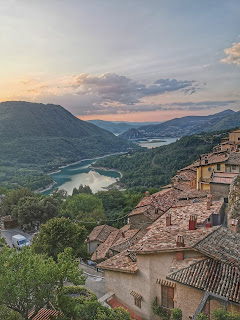 These lovely two lakes are actually reservoirs and I had spent an entire day walking around them on a very steep slope with partly overgrown trail. The view compensated for a lot of effort. I filled up with water at dusk in this village which meant that I had to walk until sunset where I camped at a fenced in picnic area. I was even protected from the cows which never showed up ...
I was now only 50 kilometers away from Rome as the crow flies but felt like in a completely different world. I did not even do a day trip or rest day in Rome in order not get out of the hiking flow!
I was now on the Sentiero Italia in the Monti Simbruni. I even walked through an abandoned ski resort which I would have never expected so close to Rome!
When I passed a commercial camp ground I was so thirsty that I asked for water. The receptionist told me there was no tap water (which I found hard to believe in a campground) but gave me bottled water. I wanted to pay for it but she refused. I still don't know whether the water here was potable or not. Next highlight was the Santurio della Santissima Trinita starring a very rare old depiction of the Holy Trinity as three identical persons. The old chapel is perched into a sheer cliff and looks totally unaccessible but a narrow path led me down there. Modern pilgrims come by car but even they have to walk 20 minutes from the nearest parking lot.
Because the old chapel is way too small for the masses of pilgrims mass is held open air on a terrace with a breathtaking view over the valley. There were dozens of souvenir stalls selling everything from baby bibs to rosaries. I was all alone again on the wonderful old hiking trail descending down into the village. 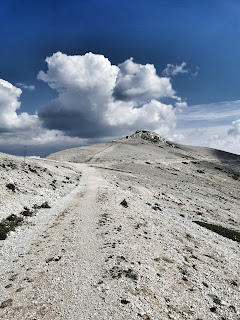 As you can see on the photo the Monti Simbruini are truly spectacular - but there is very little water. Before ascending I had made the mistake to try to follow the E1 again ending up in an impossible bushwhack. I detoured back to the Sentiero Italia taking too little water and had to hike the whole day with only one liter - big mistake! When I had finally descended again and reached the first water fountain I guzzled down two liters!
Next to the fountain I met a French cyclist I had already seen in the morning. It is always nice to meet fellow travellers but she was not the smartest one. When I police car showed up she asked them were to camp. The answer: "Definitely not here! Go down at least 10 km, because the next village there is out of our jurisdiction."
Unfortunately I made the mistake not to camp here either - not because of the police, I just wanted to get some more miles in. Therefore I walked down the road at sunset getting this fantastic view of the monastery which is not inhabited any more. 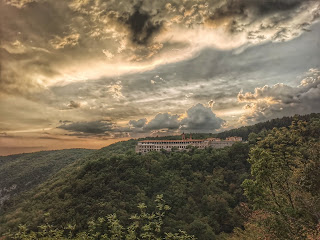 Alas, no camp site could be found. Where I had intended to camp there were too many houses. I even had to backtrack on the road in the dark and was followed by a car. I was pretty scared, turned off my headlamp and disappeared into a trail that shortcut the road switchbacks. But instead of driving on the car stopped and the driver got out. I listened intently in the darkness and suddenly something came rolling down the hill. The motor started and the car dashed off. Several trash bags rolled in front of my feet. This had not been a stalker but some person illegally dumping trash. Luckily I had not camped here ... I eventually found a decent campsite though where it was impossible to dump trash on me. 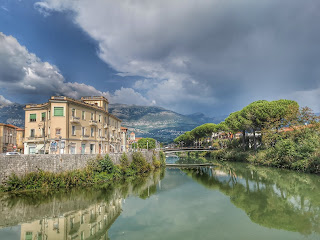 As you can see in the photo a big thunderstorm was threatening. I decided to stay low and road walked to the train station in Sora. As much as I dislike road walking here it gave me the chance to constantly snack on apple, pear and fig trees plus grapes! In case you were wondering: I didn't have to steal the fruit, there are a lot of abandoned orchards where you can help yourself.
Nights were getting colder now in September and I had had my warm winter equipment sent to me in Montecassino, my next rest stop.
Eingestellt von German Tourist um 23:32