Germany to Italy: Rothenburg to Switzerland

The chocolate problem resolved itself easily because I was again invited by fans. I could just wash everything and was even given a Bayern München T-shirt while my dirty hiker clothes were in the washing machine (I am definitely no football fan!). And of course there was a huge barbecue followed by icecream with Baileys and cream for dessert!

Next highlight was the Blautopf, the "blue" source of a river. When I was buying two pieces of cake in the nearby supermarket bakery I was even two plates and two forks - apparently nobody thinks that one person can eat two pieces of Black forest cake ... Leaving town I was stopped by another hiker who asked me: "Are you Christina Stürmer?" (For non-Germans: She is a tacky Austrian pop singer who is probably half my size...) Because our names sound so similar I am often "confused" with her although singing is definitely not my strong side. After clearing up the confusion we had a nice trail talk though.

HW 4 leads right through Ulm and I had timed this town stay perfectly because my birthday was approaching. I even had a surprise visitor: my old friend Ulli who drove two hours to treat me to my birthday dinner followed by ice cream! I spent my next rest day buying resupplies and treating myself with Black forest cake. (Ok, by now you know that I am a big fan of Black Forest cake ...)I left Ulm on the Donauradweg and made a little detour to Kloster Oberelchingen. I would have missed this gem if it hadn't been for Ulli who had recommended this overwhelming Rokkoko monastery. 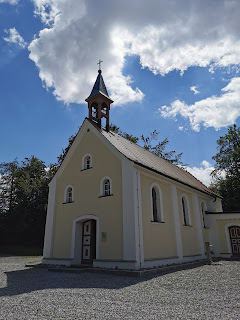 This simple little chapel in the middle of the forest is no comparison to it but when I reached it, it felt strangely familiar. I sensed that there was a water tap behind it - and indeed there was one. As I do not possess supernatural powers there must be another explanation for my foresight and it slowly dawned on me: I had been here the year before on my hike diagonal across Europe from Ireland to Greece! Again I got some water here. This stretch of the HW was not too spectacular and mostly on pavement but I could already see the Alps in the distance!

This high percentage of pavement is the biggest disadvantage of the HW 4, on the plus side there are tons of churches and monasteries and endless orchards, although in the end I was hiking through hop fields which is not really edible. But in the end all was well: I took the ferry across Lake Constance and was invited by two ladies who treated me with pork out of the Dutch oven. I even got a quarter (!) of a Black Forest cake for breakfast. Thus fortified I entered Switzerland!