Germany to Italy: Genoa to Pistoia

I took the narrow gauge train back to the mountains with eight days of food in my backpack. I quickly realized that I would not be able to make 30+ km in terrain like this: constant ups and downs plus my heavy backpack were a big problem. Also water was far scarce - good campsites as well.

When I turned around a corner in a area full of meadows, out of the blue I was attacked by six huge white dogs, so-called Maremmanos. They were protecting a herd of goats. As long as I kept a distance they left me alone. I had no choice but to wait until their herd had moved -which took a long time. Apparantly the grass here was especially juicy. Two kilometers later a sign said that the trail is closed due to free roaming sheep dogs ... There had been no sign on the other side where I was coming from. 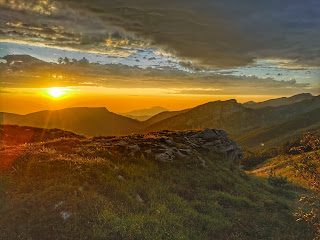 At the next mountain pass I bought an ice cream at the bar to calm my nerves after this exciting encounter. Rather unexpectedly for me these bars sold snacks and ice cream and usually have a water tap as well making life a lot easier for me. At Passo Due Santi there was a mountain hotel and this being a Sunday plenty of people were checking out. As my powerbank was running low I went the other way and sat down in the hotel lobby to charge my phone. Nobody bothered me. At Passo de la Cissa my route crossed the pilgrimage trail Via Francigena and for a couple of kilometers there were plenty of hikers. 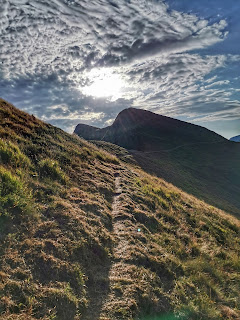 But when the pilgrimage trail left, so did the water! All water sources on my map were dry or non existant! When the last spring before a long ridgewalk was dry because farmers had diverted the water into plastic tubes to feed the troughs on their meadows I had no choice but to descend several hundred meters, get water and then climb up again. And then all I could find was a camp spot on lumpy grass. At least I was rewarded with a golden sunrise next morning.

In the Appenin National Park the route follows the narrow ridge and requires some climbing at places. Nothing too difficult but suffering from a bit of vertigo I had a hard time. And then two horses grazing on top of the ridge did not move an inch when I approached. Pushing, yelling, caressing - nothing worked. I could only sneak past them when some day hikers approached from the other side. Because I was much slower than expected I was very low on food and happy to get a two course lunch at Rifugio Prato di Spilla where busloads of tourists were out and about. 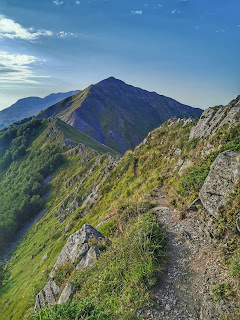 I was surprised to see so many day hikers in some places until I realized that there ski lifts were working! When I descended into Abetone literally dozens of gasping hikers were climbing up the steep hill and every other one asked me: "Is it still far?"

I had hiked the entire day on a last package of peanuts and had no food whatsoever left when I reached Abetone. There were only two small mini markets but I was happy to eat whatever they offered. But first I checked bus schedules because I was going to Pistoia for two rest days. I patiently waited half an hour for the bus to arrive and was then told that I could not buy a ticket from the driver! But he had mercy on me and waited till I had bought one from a souvenir shop across the street. Important lesson for travellers in Italy: Tickets can not be obtained from the driver, you have to buy them in tobacco shops or even bars! I was lucky again with my accommodation in Pistoia: I could relax in fantastic kind of boutique hotel right in the city centre. The owner even spoke English and gave me plenty of travel advice. And the ice cream parlor next door was heaven!