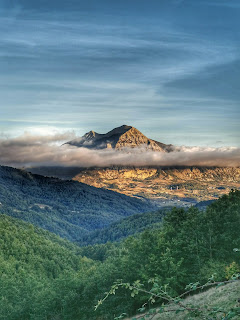 Next stop for me was the town of Lagonegro where a new pair of shoes was waiting for me in the post office. Post offices are not an efficient affair in Germany but Italy in Corona times was ten times worse. I had to wait half an hour and fill out a form just to collect my package. But I also had the best pasta in a local ristorante for just 4 Euro before hitting the trail again.

I was now only on the Sentiero Italia, the E1 officially ends here - and inofficially it never existed before. I had trouble again finding a campsite because there were only endless meadows, even without cattle it is difficult to camp in the open due to condensation which got really bad now in fall. I had to search way into darkness to find a spot under a lone tree.

In Latronico I saw a whole holiday apartment for just 23 Euro and could not resist. And the Pizza Particolare with pumpkin cream and smoked cheese in the local pizza parlor was a real culinary delight!

Despite the bad weather I had to press on into Pollino National Park. By now I was really worried about the rest of my trip. It was getting colder and colder and more and more Italian regions went into lockdown. Calabria in the South did have very few cases though.

Pollino National Park is supposed to be a real gem but I did not see much of it due to rain and fog. When I arrived at the sanctuary Madonna di Pollina it was just pouring down. I sought shelter underneath a little roof because everything was closed - even the toilets. Temperature was just 6 degrees and I didn't really like the idea to hike on but had no choice. First there was a steep descent, then the trail was not there were it was supposed to be according to me track. CAI had rerouted this section and luckily the trail marking was great. Back on track I had another endless ascent up the pass. I was soaking wet from outside and inside. I was really surprised that there was no snow up on the pass, the wind was icy! 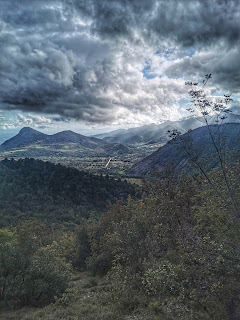 I was so happy to find the descending trail and be back in forest. Because I didn't want to cool off I even had to skip lunch!
I had to descend 1,000 metres  and then walk more endless kilometers until finally reaching Morana Calabro where I had booked myself into a hotel. Roberto, the hotel owner was great: He called ahead for me to find out which restaurant was open now in low season. I even met a German couple there and had the first chat in my mother tongue for a long time.
Roberto even drove me to laundromat in the next town so that I could wash my clothes. He had hiked the Camino in Spain and said: "We hikers must stick together!" I was the only hotel guest now in off season. And because I had not much seen of the National Park due to bad weather he even sent me a book about it to Germany!
Eingestellt von German Tourist um 17:42